In Enemy Gold Agent Dixon suspends three of his agents, Chris Cannon, Mark Austin, and Becky Midnite. So, they go camping in the Big Pines Forest of Texa. Once there, the three stumble upon Quantrell’s gold that Confederate soldiers stole back in the Civil War. The crime lord Santiago and his side wench, Jewel Panther, are in league with Dixon. They plan to take out the agents, and get that enemy’s gold! 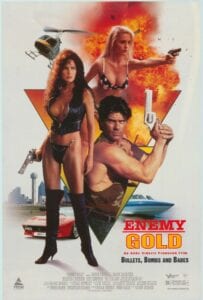 Enemy Gold begins during the United States Civil War in the Big Pines Forest of Texas. Two Confederate soldiers go behind enemy lines and steal some gold from the Yanks. They then head deep into the woods, and bury the gold at the base of a tree where it will remain hidden for more than a century. Thus beginning the legend of Quantrell’s gold.

We cut to Dallas, Texas ca 1993. Chris Cannon, Mark Austin, and Becky Midnite are three Federal agents out on a mission to bust a drug the crime lord, Santiago, and his gang of thugs. However, when their mission at a farm in the middle of nowheresville ends, Federal agent Dixon shows up to suspend the team on a technicality because he hates them and their old boss, Agent Ava Noble. The three agents check in with Noble, and she says she will call them after her meeting with a government official over Dixon’s complaint he filed about their raid.

Elsewhere, we find Santiago at a strip club where he meets with Dixon, and we learn that the two are working together. Dixon gives Santiago a walkie talkie that will allow him to monitor all agent communications to keep track of them.

Noble’s meeting with her boss confirms the team’s temporary suspension pending an investigation of their raid on the farm without a warrant. Noble suggests the three take a vacation, and the group decides to go camping in Big Pines Forest. Austin tells the other two of the story about Quantrell’s gold in that forest that was never found there.

Jewel Panther drives into Dallas to kill Cannon, Austin, and Midnight on Santiago’s orders. Dixon shows up to threaten them for wanting to kill the agents, but he leaves. Meanwhile, Santiago hears of the agent’s plan to go camping via the magic walkie talkie, and they all head to the Big Pine Forest for some relaxation and attempted murder.

While out for a piss in the woods, Becky finds the skeleton of one of the dead Confederate soldiers. Her shriek alerts Chris and Mark. There, the team finds the soldier’s diary with a map that leads to One-Eyed Willy’s rich stuff Quantrell’s gold.

From up in the sky, Santiago’s men look for the agents in a very inconspicuous helicopter. However, when Chris calls Noble to tell her about the map they found, Santiago listens in. Santiago and Jewel steal a boat from some forest rangers after Jewel kills them. Then they head over to the agents to kill them too.

Since the agents didn’t bother to take tents for their camping trip, they head over to an abandoned lodge. Santiago’s men from the helicopter decide to kill the agents first to get into good standing with their boss again. They fail to kill Becky as she showers alone outside, and Chris and Mark take chase after one goon who rides off on an ATV. He winds up dead when he breaks his neck on a tree branch/ gate thingy in the pursuit.

Coincidentally, he dies at the base of the tree that the soldiers buried the gold under all those years ago, AND it’s still got the knife in it one of the soldiers put it in a hundred years ago. Meanwhile, Becky’s dressed herself, and blown up the other goon with an explosive arrow.

Noble arrives in Dallas to talk to Dixon. Chris calls to tell her the news about the goons and that they possibly found the gold. Noble leaves Dixon to meet up with the team as Santiago and Jewel close in on them. Dixon forces his way onto Noble’s boat as she goes to help her agents. The two head out to the grand finale too.

The agents dig up the gold as Santiago and Jewel show up. They have the agents take the gold to their boat at gunpoint. However, when Becky and Jewel fight, and Becky gets the better of Jewel. Santiago pulls his gun on her too, but they have wasted too much time. Ava and Dixon arrive to save the day, but Dixon reveals his true colors, and double crosses the agents.

Dixon and Santiago get in an argument over the gold. So, Jewel shoots Dixon, and the climatic gunfight begins. Santiago and Jewel make it into the helicopter his goons flew, but they have to abandon the gold to save themselves. After it takes off, Noble shoots the helicopter with one of the exploding arrows to kill our villains.

Back in Dallas, Austin and Noble bang in her hotel room for a happy ending.