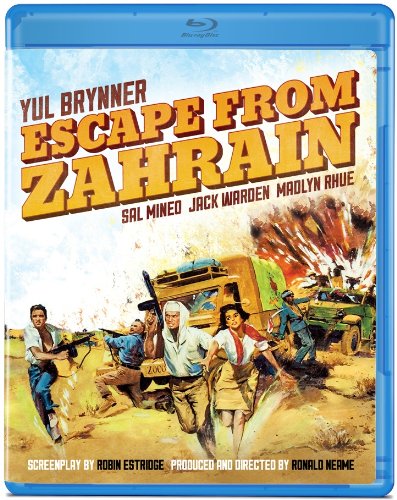 Olive Films has announced that addition of the action adventure Escape From Zahrain to their upcoming slate of Blu-ray releases. The film was directed by Ronald Neame and is based on the novel by Michael Barrett. The action drama starred Yul Brynner, Anthony Caruso, Sal Mineo, Jay Novello, and Jack Warden. Escape From Zahrain is currently available for pre-order online and will be available in stores everywhere beginning on September 17th.

In a strife-torn Arab state, fanatical loyalists of a nationalist leader (Brynner) attack a police van transporting him to prison and aid his escape into the deadly Arabian Desert. Escaping with him are fellow death row prisoners Huston (Warden), a swashbuckling American who had embezzled a fortune from the Zahrain Oil Company and Tahar (Caruso), a sadistic maniac. Mineo plays a student who helps the fugitives flee the pursuant police in a stolen ambulance. This vintage adventure yarn features a special cameo appearance by James Mason. Escape From Zahrain was released in May of 1962.

Disclaimer: Affiliate links are contained in this post. This means when you click a link, and purchase an item, Movie House Memories will receive an affiliate commission. Advertisers and Affiliate Partnerships do not influence our content. See our Terms of Use about the inclusion of affiliate links on this site for more information.
August 7, 2013
1 minute read
Show More
Back to top button
Close
Close