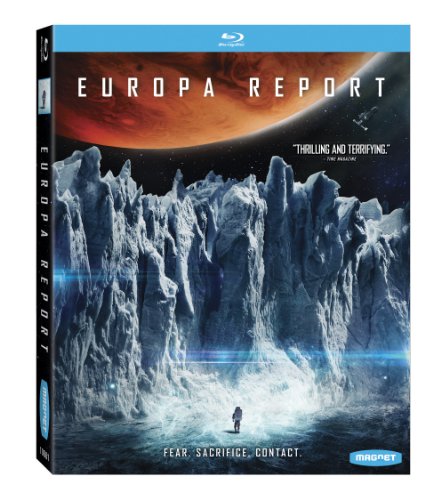 Magnolia Pictures has announced the addition of the sci-fi thriller Europa Report to their upcoming slate of Blu-ray releases. The film is directed by Sebastián Cordero and stars Sharlto Copley, Michael Nyqvist, Daniel Wu, Christian Camargo, Isiah Whitlock Jr., Karolina Wydra, and Anamaria Marinca. Europa Report is currently available for pre-order online and will be available in stores everywhere beginning on October 8th.

A unique blend of documentary, alternative history and science fiction thriller, the film follows a contemporary mission to Jupiter’s moon Europa to investigate the possible existence of alien life within our solar system. When unmanned probes suggest that a hidden ocean could exist underneath Europa’s icy surface and may contain single-celled life, Europa Ventures, a privately funded space exploration company, sends six of the best astronauts from around the world to confirm the data and explore the revolutionary discoveries that may lie in the Europan ocean. After a near-catastrophic technical failure that leads to loss of communication with Earth and the tragic death of a crewmember, the surviving astronauts must overcome the psychological and physical toll of deep space travel, and survive a discovery on Europa more profound than they had ever imagined. The screenplay is written by Philip Gelatt.

The Europa Report Blu-ray will include several special features, including:

Disclaimer: Affiliate links are contained in this post. This means when you click a link, and purchase an item, Movie House Memories will receive an affiliate commission. Advertisers and Affiliate Partnerships do not influence our content. See our Terms of Use about the inclusion of affiliate links on this site for more information.
September 29, 2013
322 1 minute read
Show More
Subscribe
Login
0 Comments
Inline Feedbacks
View all comments
Most Recent Posts
Facebook Twitter LinkedIn Tumblr Pinterest Reddit
Back to top button
Close
wpDiscuz
0
0
Would love your thoughts, please comment.x
()
x
| Reply
Close