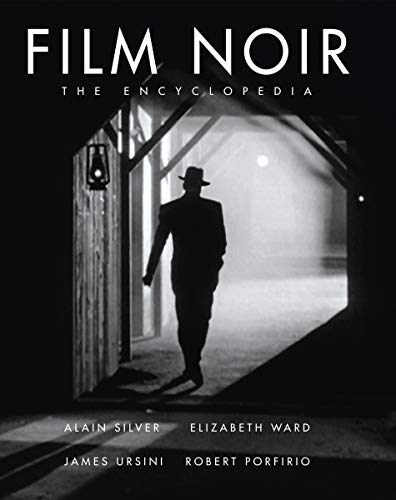 Meet the cynical and obsessive heroes of film noir portrayed by actors like Humphrey Bogart, Peter Lorre, James Cageny, Joan Crawford, and Bette Davis. You may encounter a gun-toting gangster, a femme fatale wrapped in fur, a detective with the brim of his hat turned down, or a desperate murderer lurking in the shadows of a doorway. It’s a world we all know – the seedy underbelly of the American Dream, and every bit as much a part of our culture. This wonderfully exhaustive text – tallying more than three hundred thousand words with hundreds of film stills and photos new to the work – distills everything about the movement into one volume from movies to stars to themes and motifs, and brings us up to date with contemporary contributions to the movement. Now completely revised, expanded, and redesigned, this classic pioneering work is the final word on a dark subject.

By Alain Silver, Elizabeth Ward, James Ursini, and Robert Porfirio. Get the book, and then see what is has to say about our 30 essential noirs everyone must see.

What they’re saying about Film Noir: The Encyclopedia

“It’s what you always want in a film reference book, but rarely find: comprehensive, intelligently organized, voluminously illustrated, and possessed of its own distinctive voice.” -Lawrence Kasdan, writer of Raiders of the Lost Ark and The Big Chill

“A top-flight piece of work.” -Walter Hill, director of 48 Hours

“An extraordinarily well done book about a neglected subject … This is likely to become the book on film noir.” -Robert Benton, writer of Bonnie and Clyde

“This is certainly an important book to have on your shelf.” — Leonard Maltin’s Movie Crazy Blog

“Thank heaven for the ecumenical definition of film noir used by the editors the fourth and fattest edition of The Film Noir Encyclopedia. The compendium is venerable-30 years and counting-but the overall acuity of the opinions expressed are still very much alive.” — Directors Guild of America Quarterly

“These four [editors Silver, Ward, Porfirio, and Ursini] have cornered the market on shadows and fog. And they’re undoubtedly the most informed film noir historians working today. Film Noir: The Encyclopedia fills you in on what came before and after, be it back in noir’s heyday or in its more recent neo-noir incarnations. And the book does so with wily eye for detail.” — Sun Post Weekly

“[T]he publication of an updated Film Noir: The Encyclopedia…is a rewarding reminder of the nitty-gritty reality of that film style’s golden day” — The Morning News

“One of the first and best books in English about film noir was 1979’s Film Noir: An Encyclopedic Reference to the American Style from The Overlook Press…Now, 31 years later comes a substantially rewritten version of the book…Both the individual entries and the thematic essays in the new Film Noir: The Encyclopedia are engrossing reading for those interested in the world of noir” — Glenn Erickson, DVD Savant

“For those of you who are newly interested in film noir, Alain Silver and Elizabeth Ward’s Encyclopedia is a superb starting place…The new volume is not just a cleaned-up reprinting – the Encyclopedia has been overhauled and improved in almost every fashion” — Where Danger Lives Blog

“The authors’ opening essay lays out the history and parameters of noir in a succinct but undogmatic way, offering an intro for the new viewer as well as food for thought for the hardboiled fan–It’s a fascinating ride, full of shadowy dames and fedora-topped detectives…This new edition of the definitive text on film noir is a perfect companion for a foray into the dreamlike world of some of the most dark and mesmerizing movies ever made” — PopMatters.com

“The parameters of film noir, as well as our knowledge of this most sinister movie genre, are greatly expanded with the recent release of Film Noir: The Encyclopedia a revised and redesigned fourth edition of the classic pioneering text that movie lovers consider the final word on the cinematic world of fog and shadows…Film Noir: The Encyclopedia is an essential reference work for students of film and for movie fans who love plying cinema’s mean streets. It is indeed a beacon of light in an artful landscape of darkness.” — Projections Blog

“This issue has been revised, updated and redesigned, and will provide lovers of the genre with even more ammunition in the ongoing debate over the cinematic world filled with shadowy characters and femme fatales…The book is a concise compendium of films noir, actors and directors and filmmakers who helped create this unique and beloved genre…This wonderfully exhaustive text tallying more than three hundred thousand words with hundreds of film stills and photos new to the work distills everything about the genre into one volume from movies to stars to themes and motifs, and brings us up to date with contemporary contributions to the genre. This is the final word on a dark subject.” — Film Monthly Magazine