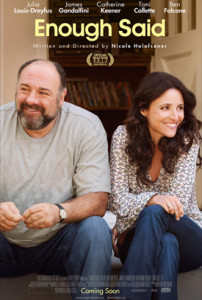 Fox Searchlight Pictures has released the first two clips for their upcoming comedy Enough Said. The film is written and directed by Nicole Holofcener and stars Julia Louis-Dreyfus, James Gandolfini, Toni Collette, Catherine Keener, and Ben Falcone. Enough Said is scheduled to hit theaters on September 20th. The film was one of Gandolfini’s last films before his death over the summer.

In the film, a divorced and single parent, Eva (Louis-Dreyfus) spends her days enjoying work as a masseuse but dreading her daughter’s impending departure for college. She meets Albert (Gandolfini) – a sweet, funny and like-minded man also facing an empty nest. As their romance quickly blossoms, Eva befriends Marianne (Keener), her new massage client. Marianne is a beautiful poet who seems “almost perfect” except for one prominent quality: she rags on her ex-husband way too much. Suddenly, Eva finds herself doubting her own relationship with Albert as she learns the truth about Marianne’s ex.

Clips from Enough Said  courtesy of The JoBlo Movie Network