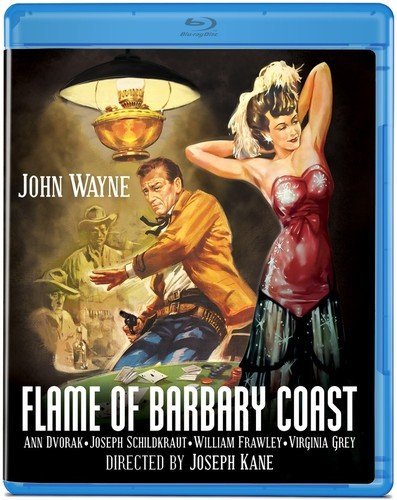 Olive Films has announced that they are adding the musical western Flame Of Barbary Coast  to their upcoming slate of Blu-ray releases. The film was directed by Joseph Kane and stars John Wayne, Ann Dvorak, Joseph Schildkraut, and William Frawley. Flame of Barbary Coast will be available in stores and online sometime during the month of June.

In the film, Wayne is “Duke,” a good-hearted rancher from Montana who comes to San Francisco to collect a debt owed to him by Tito (Schildkraut), slick owner of a casino. He falls in love with Flaxen (Dvorak), the beautiful saloon singer engaged to Tito! Duke loses his hard-earned bankroll at Tito’s casino forcing him to leave town. But not for long! The next time he comes to town, his luck radically changes. In fact, he’s so lucky that he almost cleans out Tito’s casino. With his winnings, Duke builds a casino across the street from Tito, hiring Flaxen to star in his floor show. All goes well until the great San Francisco earthquake forces Duke, Flaxen and all the residents of the city to regroup and rebuild.

Flame of Barbary Coast was released in May of 1945 and was nominated for two Academy Awards, Best Music and Best Sound.

Disclaimer: Affiliate links are contained in this post. This means when you click a link, and purchase an item, Movie House Memories will receive an affiliate commission. Advertisers and Affiliate Partnerships do not influence our content. See our Terms of Use about the inclusion of affiliate links on this site for more information.
May 5, 2013
1 minute read
Show More
Back to top button
Close
Close