Flash Gordon is an American football hero who finds himself skyjacked aboard Dr. Hans Zarkov’s rocketship along with his beautiful girlfriend Dale Arden. When their ship crashes into the realm of Emperor Ming the Merciless on the planet Mongo, he deems Earth a threat to his rule. However, he immediately becomes smitten with Dale, and looks to take her as his concubine. He then makes plans to execute Flash and destroy Earth. Flash manages to avoid the charms of Ming’s lovely daughter to unite the warring kingdoms on the planet, rescue Dale, and save the Earth! 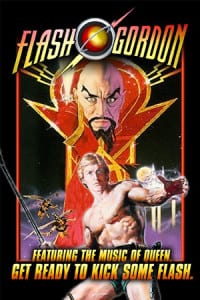 In Flash Gordon, the Earth is in jeopardy. The evil alien bad guy Ming The Merciless has decided to play an intergalactic game of Wii with the weather and geological elements of the planet. Ming does this simply because he is bored, and he has a magic glowing ring that he received from a box of Cracker Jacks on Arboria. He plans to toy with the Earth and ultimately destroy it. What an asshole!

Unaware of the danger, New York Jets starting quarterback Flash Gordon and journalist Dale Arden board a small airplane from an airport apparently in the middle of fucking nowhere. As with everything in this film, things move fast. Flash essentially confesses his love to Dale within minutes, but before the two can get married and begin having kids, Ming comes along and incinerates/kidnaps/suck out of the god damn plane the two pilots.

Fortunately, full-time lover, but part-time pilot Flash is able to safely crash the plane into the home of the mad scientist Dr. Hans Zarkov. Zarkov is the only person on Earth who saw this attack on the planet coming, and is about to blast off in his home made rocket to fly to the planet Mongo, Ming’s planet, and save the Earth. But before going all October Sky, he kidnaps the loving couple and launches to the blue-screen world of Mongo.

This displeases Flash, who lashes out at Ming by putting on a rebellious display of Jets offensive football which ends with the usual head injury to the quarterback. An angry Ming orders Flash to be executed, and Zarkov to be brainwashed and reprogrammed.

Flash is killed, and yet the film goes on. Ming’s daughter Princess Aura, who appears to be the town bicycle of the planet Mongo, wants to make sure that Flash gets a ride too. She seduces Ming’s surgeon, her other boyfriend, into saving Flash from death. Aura then smuggles Flash out of the palace and to Prince Barin’s, her other boyfriend, crib in the kingdom of Arboria. Along the way Flash makes a telepathic phone call to Dale to tell her that he is alive and that he has a boner for Aura.

Aura and Flash arrive in Arboria. Prince Barin is quite upset that Aura has brought her other boyfriend Flash to his lovely swamp planet. Nevertheless, Barin agrees not to kill Flash, but once Aura leaves, immediately makes Flash participate in a ridiculously deadly manhood ritual. Flash is able to trick Barin and escape into the swamp. Barin chases the quarterback into the set of Swamp Thing, but both men are captured by Prince Vultan’s Hawkmen and taken to Sky City.

Meanwhile at the palace, Ming’s chief aide Klytus has informed the Emperor that Gordon is alive. Ming dispatches Klytus to torture Aura and recapture Gordon. At the same time, Gordon and Barin are brought before Vultan. Barin is pissed about being cock blocked by Flash, so he demands a fight to the death. Flash wins the fight, saves Barin, and spares his life.

Barin decides that it should be bros before hoes and pledges his life to the man who he just wanted to kill. While all this male-bonding is going on, Klytus arrives to take everyone into custody. But before he can do so, Barin and Flash kill Klytus by turning him into a human pin cushion. Vultan and the Hawkmen turn chicken and flee their city, leaving the Earth trio and Barin for Ming’s vengeance.

When Ming arrives, he takes everyone but Flash to his ship. Ming comes down to Sky City to make Flash an offer of a kingdom. Sure, why not. But Flash turns down the opportunity to rule Earth when he learns that the fine print says that Ming gets to place his royal scepter in a little Earth woman strange and marry Dale. Ming leaves disappointed, and orders his ship to destroy Flash and Sky City.

Flash finds a rocket cycle in a city where everyone can fly and escapes before the city is destroyed. Flash rejoins Vultan, who has finally found his balls underneath his feathers and is willing to join the earthman in taking on Ming. The Hawkmen and Flash attack and capture one of Ming’s warships. Flash begins flying the ship at the palace so that he can stop Ming’s wedding, and the destruction of the Earth.

Meanwhile, Aura escapes her guards and frees Barin and Zarkov. The two men enter the control room to stop the lightening field that protects the city and will destroy the ship piloted by Flash. With the field down, Flash’s suicide run is no longer a dead end for our hero and is just another crashing ship. This is Flash’s third crash of the film, they should have called him Crash Gordon. Flash’s warship crashes into the palace in the middle of the wedding. The ship literally stabs Ming through the chest.

Flash offers to spare Ming’s life, just in case a spaceship through the heart is not enough to kill him, if he will stop the attack on Earth. Ming attempts to use his magic ring on Flash, but his “precious” is running out of juice as Ming’s life slowly fades away. Zarkov tells everyone that the Earth is saved, and we are granted another chorus from Queen before the end credits. However, the film ends with a final threat, as we see Ming’s ring lying on the palace floor suddenly picked up by an unknown suspect and activated. Implying that they intended to make another of these shitty films.