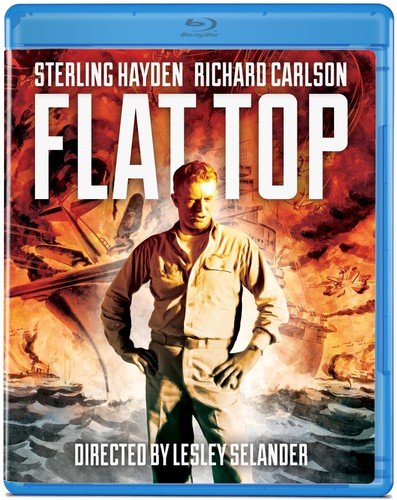 Olive Films has announced the addition of the war drama Flat Top to its upcoming slate of Blu-ray releases. The film was directed by Lesley Selander and starred Sterling Hayden, Richard Carlson, William Phipps, John Bromfield, and Keith Larsen. Flat Top will be available for purchase online and in stores beginning on August 27th.

They are reckless. Cunning. And very deadly. Thy are the most fearless fighter pilots in the Pacific. And they turn the blue skies bloody red in this blazing WWII adventure. The Third Fleet carrier force streaks toward the Japanese-held Philippines. Their mission: launch an all-out air strike to regain control of the embattled islands. But the fleet’s top-gun fighter squadron must fly into combat without one of its hottest pilots. Grounded by the carrier’s steel-nerved skipper for disobeying orders, the young flight officer must sit out the explosive air war. But as the overwhelming Japanese air force downs most of the squadron, the suspended ace is desperately restored to duty. And now, with the squadron’s very life at stake, he must win back his commander’s respect in a ferocious battle for honor and glory. Flat Top was released in October of 1952 and was nominated for an Academy Award for Best Film Editing.

Remo Williams: The Adventure Begins (1985) Becomes a Weapon on DVD

Remo Williams: The Adventure Begins (1985) Becomes a Weapon on DVD