In Footloose, when teenager Ren McCormack and his family move from Chicago to a small Midwestern town, he’s in for a real case of culture shock. Although he tries hard to fit in, Ren can’t comprehend he’s living in a place where rock music and dancing are illegal. Also in town is Ariel Moore; a troubled but beautiful blonde with a jealous boyfriend, and Bible-thumping minister for a father who is responsible for keeping the town dance-free. While Ren and his classmates want to do away with the dancing ordinance, they have an uphill battle against the repressed townspeople. 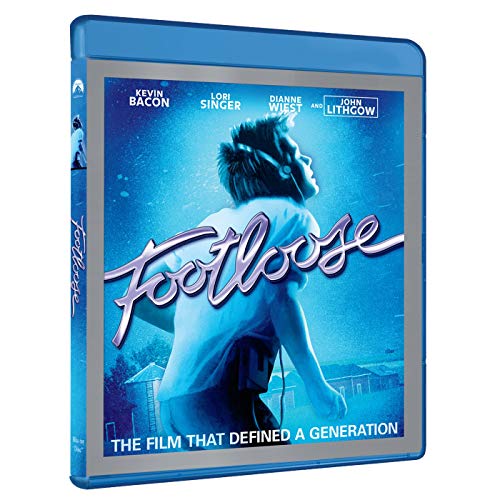 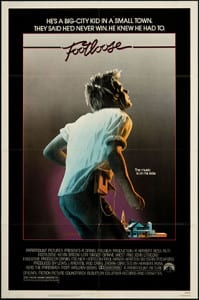 Ren is a teenager that moves to a small religious town with his single mom. They move because apparently Ren’s mom can’t afford to live where the white people live in Chicago so she goes to a dying rural town that has banned dancing. This guarantees where there will be no black people in this town to start a new life. And there are literally no black people in this town, find one, I dare you.

Ren is a dancer/gymnast/cool guy, but he is new and as an outsider he has to prove himself the way real men do – playing chicken on tractors. When he gets angry he cools off by stripping, drinking beer, and doing some dancenastics.

Whether it is because he drives a girlie yellow bug while listening to quiet riot, because he wears a skinny tie to school, or because, no one likes a dancing queen, he just doesn’t fit in.

Fortunately, he finds a best friend Willard, played by Kevin Dillon, or some other famous actor’s weird looking brother.

He also hits on the preacher’s daughter, Ariel, and she is no mermaid, but she could pass herself off as a wet fish.

Apparently, there are no more pretty girls in Hollywood in 1983 because Lori Singer is cast as Ariel, the love interest to Kevin Bacon’s Ren. She is so hideous looking that they have to cast Sarah Jessica Parker to be on screen with her so that she will look pretty by comparison.

Ariel is extremely troubled. In addition to being an ugly chick in a preachers home, or maybe because she was an ugly chick in a repressed home, she is troubled. She is annoying, has a terrible personality, and gets her rocks off standing between cars racing down the highway, standing in front of trains, and listening to Shalimar at the drive thru, like I said, she is troubled.

The real conflict comes up when Ren learns that this small town has banned dancing.

This is because about 5 or 6 years before, a bunch of kids, including Ariel’s older brother, died in a drunken car accident. This town identified the natural cause of this tragedy: rock music and dancing.

Jon Lithgow plays the ugly girl’s uptight Baptist preacher father. Somehow this preacher with a tiny congregation dictates the town’s laws. It’s obvious why he’s uptight; he’s a Baptist preacher in what is clearly Orem, Utah. Because this is the 1980s, and the gays are about 20 years from making any noise about getting married, Preacher Dad figures he will attack the gays where it hurts them the most – by taking away dance.

Because Ren is spending time with the preacher’s daughter, Ren’s mom is fired and Ren gets cut from the gymnastics team. Rather than returning to Chicago, Ren decides the real answer to his problems is to organize a dance.

Apparently, no one in that tiny little town knew that the county line went right through a warehouse in town, so the kids are able to plan the dance there.

Before the dance, however, and for no reason whatsoever, Ariel gets the crap beat out of her by the guy she dumped for Ren.

Even though the kids don’t need permission to do a little dance. Ren shows up at the town counsel meeting and misinterprets some bible verses. Apparently, the towns most powerful preacher has never encounter those bible verses– probably because they were from the Old Testament and who really reads that part of the bible? So he reads some bible versus and the townspeople, led by preacher dad give their support the dance as long as it is held in the other county.

They go to the dance, but first Ren and Sean Penn’s touched brother fight Ariel’s ex boyfriend and his goon friends. Ren uses his patented punch dancing/gymkata, otherwise known as swayzkate to win the fight.

Everyone celebrates the only way they don’t know how – to dance. And they do it surprisingly well.