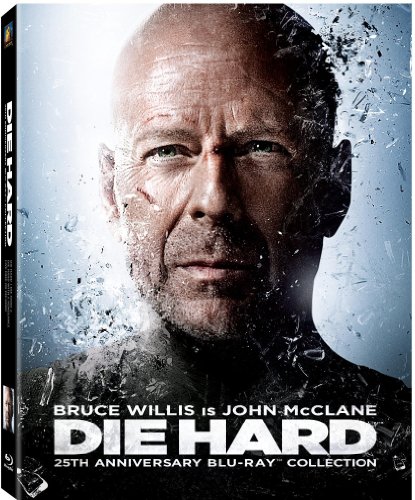 The original Die Hard was released in 1988 and starred Bruce Willis, Alan Rickman, and Bonnie Bedelia.  The film was directed by John McTiernan and grossed over $78 million at the box office.  It was followed by Die Hard 2: Die Harder in 1990, Die Hard With A Vengeance in 1995, and Live Free or Die Hard in 2007.  The fifth film in the series, A Good Day To Die Hard, is scheduled to hit theaters on February 14, 2013.

Die Hard: 25th Anniversary Collection features the first four films and a fifth disc that includes several bonus features including: Modern-Day Hero — Casting, evolution and legacy of John McClane feature; Along For The Ride — Engaging sidekicks who have teamed up with McClane feature; Bad To The Bone — McClane’s well-armed and formidable foes feature; Punishing Blows — Creating the intense action sequences, fistfights and stunts feature; Explosive Effects — Role of groundbreaking visual and special effects including some of the biggest explosions on screen feature; Reinventing The Action Genre — Development of the franchise from concept to character to story feature; and The Right Hero For The Right Time — Appeal and influence of Die Hard films on pop culture feature.