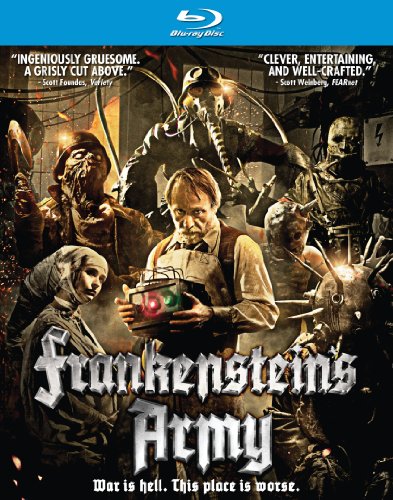 MPI and Dark Sky Films has announced that addition of the action horror film Frankenstein’s Army to their upcoming slate of Blu-ray releases. The film is directed by Richard Raaphorst and stars Karel Roden, Joshua Sasse, Robert Gwilym, Alexander Mercury, Luke Newberry, and Hon Ping Tang. Frankenstein’s Army is currently available for pre-order online and will be available in stores everywhere beginning on September 10th.

Toward the end of World War II, Russian soldiers pushing into eastern Germany stumble across a secret Nazi lab, one that has unearthed and begun experimenting with the journal of one Dr. Victor Frankenstein. The scientists have used the legendary Frankenstein’s work to assemble an army of super-soldiers stitched together from the body parts of their fallen comrades — a desperate Hitler’s last ghastly ploy to escape defeat.

Dodge City (1939) is Bright and Beautiful on Blu-Ray

Dodge City (1939) is Bright and Beautiful on Blu-Ray