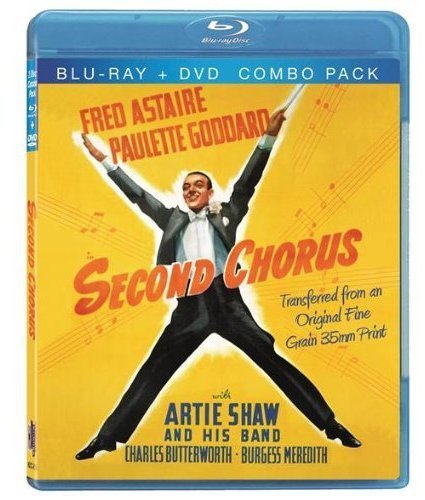 In the film, friends Danny O’Neill (Astaire) and Hank Taylor (Meredith) prolong their college career by purposefully failing for seven years, all to lead the college band, “O’Neill’s Perennials.” When a woman named Ellen Miller (Goddard) serves them a collection notice for a set of encyclopedias they never paid for, the duo woo Ellen away from her debt collection day job to be their manager. Meanwhile, Artie Shaw (playing himself) and his band grow tired of losing gigs to the Perennials and try to draw Ellen away to work for them. With lyrics by the legendary Johnny Mercer (“Dream,” “Moon River”) and music by both Hal Borne and Artie Shaw, Second Chorus received Academy Award nominations for Best Song (“Would You Like to Be the Love of My Life?”) and Best Score. Film Chest transferred the 1940 film from an original 35mm fine grain nitrate print. After a 2k scan, the film was digitally restored in high definition to attain the highest quality audio-visual experience possible.

Second Chorus is presented in 1.33:1 full screen and original sound. The Blu-ray/DVD combo pack will include several special features, including: an audio commentary by author Tom Santopietro; a before-and-after restoration demo; a movie trailer; and bonus original movie art postcard.

Disclaimer: Affiliate links are contained in this post. This means when you click a link, and purchase an item, Movie House Memories will receive an affiliate commission. Advertisers and Affiliate Partnerships do not influence our content. See our Terms of Use about the inclusion of affiliate links on this site for more information.
April 21, 2013
550 1 minute read
Show More
Subscribe
Login
0 Comments
Inline Feedbacks
View all comments
Most Recent Posts
Facebook Twitter LinkedIn Tumblr Pinterest Reddit
Back to top button
Close
wpDiscuz
0
0
Would love your thoughts, please comment.x
()
x
| Reply
Close