Two fast-track yuppies, yearning for the tranquility of rural life, give up their careers and New York lifestyle only to find the wacky eccentrics outnumber the mosquitoes in their idyllic countryside. 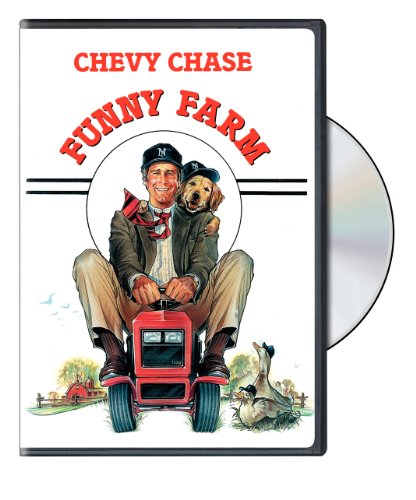 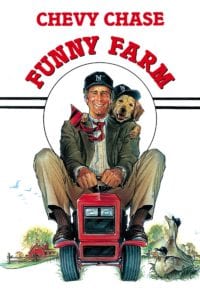 Chevy Chase and Madolyn Smith play Andy and Elizabeth Farmer, a couple of yuppies from New York City. They are over the Big Apple, and they decide to move to the Connecticut countryside for some peace and quiet. Andy is professional sportswriter looking to write his great American novel about an ex-Marine turned journalist named I. M. Fletcher. Elizabeth is a happy housewife by day and an urban cowgirl at night, but that’s for another podcast. The two are a match made in vulgarian heaven.

Throughout this hilarious fish-out-of-water tale, Andy and Elizabeth must endure sign-stealing teenagers, telephone-less houses, starvation diets, and drunk-driving mailmen tossing deliveries into tiny mail boxes like a stumbling barfly playing darts at 2am. Even their furniture arrives late due to a disintegrating bridge and a poorly drawn map. You ever notice the smaller the town, the more detailed the directions to a place are?

Once the Farmers settle into their new Rockwellian paradise, the hilarity continues with Andy’s writer’s block. Instead of singing Snow White songs to the birds, Andy tosses a steaming cup of his mocha frustrations at them. He then buys a heavenly dog named Benji which reincarnates its ass out of the town before Andy can fuck up its life too, and then, if that’s not enough, Andy discovers a dead body buried on the farm. The undertaker’s small-town prices are killer, but this is comedy gold we’re talking about, so it pays for itself.

More wackiness ensues when a sea serpent slips into the house. It opens up a can of oceanic whoop-ass on an unsuspecting fisherman during a fishing contest. All this excitement eventually makes the whole town hate Andy almost as much as the cast of Community hates Chevy.

Elizabeth, on the other hand, adjusts to small-town life with less difficulty. She finds a stuffed squirrel (not a euphemism) to inspire HER, and she writes a successful child’s book about it. The tale is a surprising one about a fish-out-of-water squirrel named Andy that moves to the country where all kinds of hilarious misadventures happen to him. She sells the book to a publisher, pissing Andy off quite a bit.

In time, Andy starts writing again, but when he asks Elizabeth to read part of his manuscript at an anniversary dinner (a dinner where he sets a local record eating 31 deliciously disgusting lamb fries), he discovers he’s a lousy novelist…and Elizabeth is not. So, he burns part of his manuscript, and becomes a raging alcoholic instead.

Weeks pass, and Andy snaps. In a fit of drunken rage, he tries killing the crazy mailman, but his editor appears out of nowhere; demanding a manuscript. So Andy steals his wife’s new manuscript, and passes it off as his own, and just like rape, theft isn’t a crime when you’re married.

When Elizabeth finds out, she files for divorce, but the unhappy couple find out it is too expensive (and time-consuming) to divorce. So, they choose instead to hire the entire simpleton population into faking the town is a Norman Rockwell utopia in order to sell the farm to some unsuspecting rubes from the big city. Then, they can divorce, and get on with their unhappy lives. Unfortunately, that even goes off the rails as the town charms the new buyers with fake over-the-top antics which ultimately changes the hearts of our Farmer family because it wouldn’t be a “Funny Farm” without the Farmers.