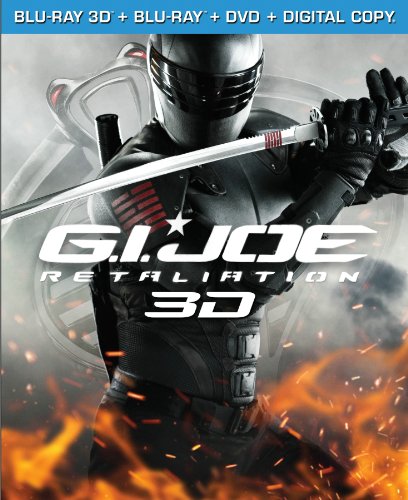 Blu-ray.com is reporting that Paramount Pictures will bring their hit action film G.I. Joe: Retaliation to Blu-ray this summer. G.I. Joe is a film series based on the popular Hasbro toyline and 80’s cartoon series that ran for 85 episodes from 1985-1986 and spawned one animated film. The film will be available online and in stores beginning on July 30, 2013.

In the film, the G.I. Joes are not only fighting their mortal enemy Cobra; they are forced to contend with threats from within the government that jeopardize their very existence. The sequel is directed by John Chu  and continues the toy-inspired world depicted in 2009’s G.I. Joe: The Rise of Cobra with a primarily new cast (except for the returning Ray Park as Snake Eyes, Channing Tatum as Duke, and Byung Hun-lee as Stormshadow). Newcomers include Bruce Willis as Joe Colton, Dwayne Johnson as Roadblock, Elodie Yung as Jinx, Adrianne Palicki as Lady Jaye, DJ Cotrona as Flint, RZA as The Blind Master, Ray Stevenson as Firefly, and Joseph Mazzello as Mouse.

G.I. Joe: Retaliation was released in March of 2013 and has grossed over $273 million in worldwide box office to date.

Paramount Pictures Home Entertainment has not released any details concerning the exact tech specs and special features that will be included with the disc.

Disclaimer: Affiliate links are contained in this post. This means when you click a link, and purchase an item, Movie House Memories will receive an affiliate commission. Advertisers and Affiliate Partnerships do not influence our content. See our Terms of Use about the inclusion of affiliate links on this site for more information.
April 19, 2013
1 minute read
Show More
Back to top button
Close
Close