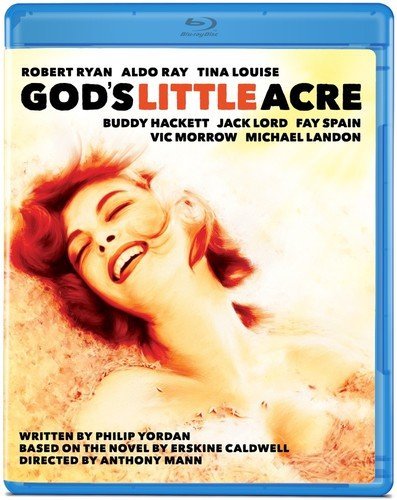 Olive Films has announced that are adding the comedy romance God’s Little Acre to their upcoming slate of Blu-ray releases. The film was directed by Anthony Mann and starred Robert Ryan, Aldo Ray, Buddy Hackett, Jack Lord, Vic Morrow, Michael Landon, and Tina Louise. God’s Little Acre will be available for purchase online and in stories beginning on July 30th.

This rollicking look inside the rural Deep South brings to life the primitive, ribald rustics of Erskine Caldwell’s steamy bestselling novel. Both humorous and heartrending, this critically acclaimed film reveals the hidden passions heating up beneath the hot Southern sun, as well as the warmth and humor of everyday life. A poor sharecropper’s family struggling to survive is nearly torn apart as the patriarch stubbornly pursues his belief that gold is buried somewhere on his land. Nothing will stop him as he goes to outrageous lengths in his efforts to find the treasure. God’s Little Acre was released in August of 1958.