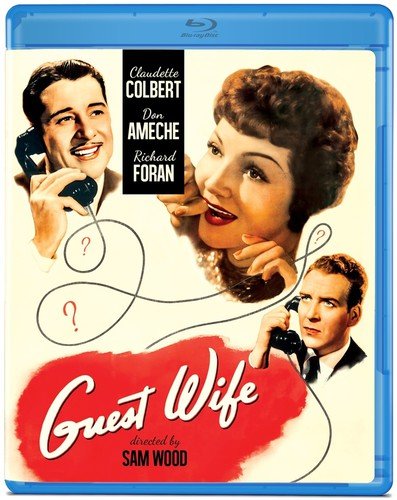 Olive Films has announced that addition of the romantic comedy Guest Wife to their upcoming slate of Blu-ray releases. The film was directed by Sam Wood and starred Claudette Colbert, Don Ameche, Dick Foran, Charles Dingle, and Grant Mitchell. Guest Wife is currently available for pre-order online and will be available in stores everywhere beginning on September 24th.

Funny guy Ameche plays Joe, a journalist long overdue for a vacation but stuck with a family-minded boss. Joe finally complains that he needs some time with his own wife and gets the vacation he needs. There’s only one problem–Joe isn’t married. Best buddy Chris (Foran) comes to the rescue, offering to let Joe borrow his wife, Mary, played by heartthrob Claudette Colbert. The plan runs smoothly until Joe, Mary, and Chris end up in the same house, with Mary and Joe forced to share the same bedroom in order to keep the deception alive. The pairing of Ameche with Colbert provides for excellent comedy, and the sure hand of director Wood keeps the pacing alive in this light comedy. Guest Wife was released in July of 1946 and was nominated for an Academy Award for Best Music.

Disclaimer: Affiliate links are contained in this post. This means when you click a link, and purchase an item, Movie House Memories will receive an affiliate commission. Advertisers and Affiliate Partnerships do not influence our content. See our Terms of Use about the inclusion of affiliate links on this site for more information.
September 23, 2013
389 1 minute read
Show More
Subscribe
Login
0 Comments
Inline Feedbacks
View all comments
Most Recent Posts
Facebook Twitter LinkedIn Tumblr Pinterest Reddit
Back to top button
Close
wpDiscuz
0
0
Would love your thoughts, please comment.x
()
x
| Reply
Close