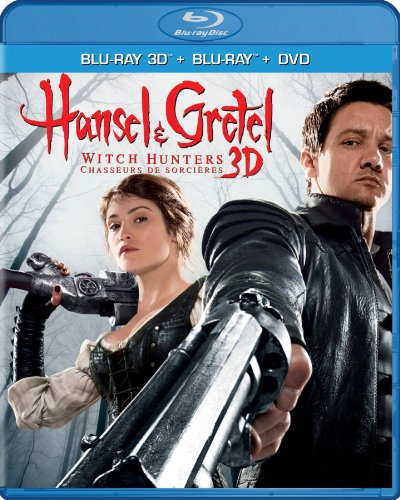 Hansel & Gretel: Witch Hunters takes place 15 years after the siblings’ incident at the gingerbread house. In this dark spin on the fairy tale, siblings Hansel and Gretel are a formidable team of bounty hunters who track and kill witches all over the world.

The film was released in January of 2013 and has grossed over $211 million in worldwide box office.

Hansel & Gretel: Witch Hunters will be available in both its original theatrical version and an unrated version with never-before-seen footage in a Blu-ray/DVD combo or a three-disc Blu-ray 3D/Blu-ray/DVD combo, both with UltraViolet. The combo packs boast revealing special features that take audiences behind-the-scenes for a look at the reinvention of the story, an in-depth examination of the gruesome witches and an up close and personal visit with the extraordinary troll, Edward. The film will also be available as a single-disc DVD that includes the theatrical version of the film.

Special features as listed as follows:

Disclaimer: Affiliate links are contained in this post. This means when you click a link, and purchase an item, Movie House Memories will receive an affiliate commission. Advertisers and Affiliate Partnerships do not influence our content. See our Terms of Use about the inclusion of affiliate links on this site for more information.
March 26, 2013
1 minute read
Show More
Back to top button
Close
Close