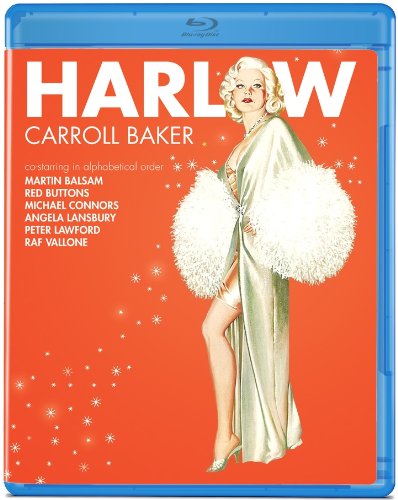 Olive Films has announced that it adding the Hollywood drama Harlow to their upcoming slate of Blu-ray releases. The film was directed by Gordon Douglas and is based on a screenplay written by John Michael Hayes. The biographical film starred Carroll Baker, Red Buttons, Raf Vallone, Angela Lansbury,Peter Lawford, and Leslie Nielsen. Harlow will available for purchase in stores and online beginning on July 23rd.

The film takes place in Hollywood in 1928, where everything is made of milk and honey, magic and fantasy. Jean Harlow’s spectacularly controversial and tragic career begins with bit parts in movies while she’s living with her mother and opportunistic stepfather. When Hollywood agent, Arthur Landau (Buttons – Golden Globe Nominee), spots her on a film set, he gets her a series of comedy roles and soon realizes he has a gold mine in Miss Harlow (Baker). She becomes an overnight sensation and critics hail her as the next great sex symbol. This film documents the rise and fall of a true Hollywood Legend.

Harlow was released in June of 1965 and grossed over $3.5 million at the box office.

Disclaimer: Affiliate links are contained in this post. This means when you click a link, and purchase an item, Movie House Memories will receive an affiliate commission. Advertisers and Affiliate Partnerships do not influence our content. See our Terms of Use about the inclusion of affiliate links on this site for more information.
June 3, 2013
1 minute read
Show More
Back to top button
Close
Close