In Heat, an obsessed detective finds his fate is linked with a brilliant thief after a high-stakes securities heist. 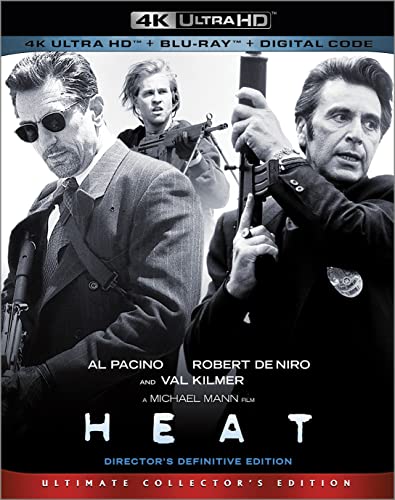 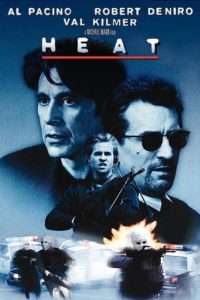 A talented crew of professional thieves, Neil, Chris, Michael, Trejo, and Waingro rob an armored car. Waingro kills one of the car’s guards unprovoked, which requires the rest of the crew to kill the other guards. After the job, the crew attempts to kill Waingro, but he escapes them.

LAPD Lieutenant Hanna investigate the crimes and pursues Neil and his crew. Lt. Hanna is more married to his work than his wife, which strains their relationship, including with his stepdaughter, Lauren. Lt. Hanna works tirelessly to build a case against Neil and his guys.

Lt. Hanna investigates the murder of a prostitute, and it is tied to Waingro, who serially murders prostitutes. Meanwhile, Neil begins to date a young woman. He lies to her and tells her he’s a salesman. He and his crew find one last score so big they take the risk. They plan to rob a bank. While they are planning the job, Lt. Hanna pulls Neil over on the freeway, and the two of them share coffee. They conclude that either one would not hesitate to kill the other if necessary. But Lt. Hanna doesn’t have enough evidence on Neil to arrest him, so the two part ways.

The crew was nearly murdered by a sketchy financier, Van Zant, when attempting to sell the bonds they stole in the armored car job. They swear to kill him. Van Zant hires Waingro to kill the crew to ensure his safety. Van Zant gets wind of the crew’s bank job and tips the police.

Trejo discovers he’s being followed, so the crew pulls parolee, Don Breedan, back into crime to act as their driver for the bank job. LAPD accosts them as they are leaving the bank, and a massive shootout ensues. Multiple cops are shot. Neil and Chris escape after Chris is shot. Michael is shot dead trying to escape. Breedan is shot and killed. Neil gets to Trejo’s house and finds him shot up, his family murdered. Trejo reveals that Waingro and Van Zant were the reason the job was known to police. Neil busts into Van Zant’s home and murders him.

Lauren attempts suicide, but Lt. Hanna saves her and rushes her to the hospital. Meanwhile, the police use Waingro as bait to try and capture Neil. Neil sets off the fire alarm at the hotel in order to get to Waingro’s room and kill him. But he’s spotted by Hanna. Neil tries to escape on the runway at LAX airport, where he’s pursued by Hanna. After an intense hunt, Hanna shoots Neil and hold his hand out of respect as he dies.