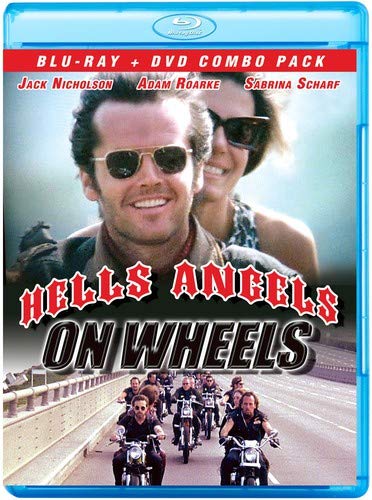 Independent distributors Hen’s Tooth Video have announced that they will add the crime drama Hells Angels on Wheels to their upcoming slate of Blu-ray releases. The film was directed by Richard Rush and starred Adam Roarke, Jack Nicholson, Sabrina Scharf, Jana Taylor, and John Garwood. Hells Angels on Wheels is currently available for pre-order and will be available in stores everywhere beginning on September 3rd.

Nicholson stars as Poet, a bored gas station attendant who leaves his mundane life in the dust to blast down the open highway with the Hell’s Angels, one of the world’s hardest riding, toughest living motorcycle gangs. It’s nonstop sex, drugs and action on a mind-blowing ride at first, but when the naive Poet gets mixed up with the gang leader’s pretty girlfriend (Scharf), his new high-octane lifestyle explodes! With the fluid cinematography of Easy Rider‘s Laszlo Kovacs, this freewheeling, bare-knuckled adventure, featuring actual members of the notorious Northern California Hells Angels, is one wild trip! Hells Angels on Wheels was released into theaters in June of 1967.

Hen’s Tooth Video has not released any details concerning the exact tech specs and special features that will be included with the disc.

Disclaimer: Affiliate links are contained in this post. This means when you click a link, and purchase an item, Movie House Memories will receive an affiliate commission. Advertisers and Affiliate Partnerships do not influence our content. See our Terms of Use about the inclusion of affiliate links on this site for more information.
July 21, 2013
459 1 minute read
Show More
Subscribe
Login
0 Comments
Inline Feedbacks
View all comments
Most Recent Posts
Facebook Twitter LinkedIn Tumblr Pinterest Reddit
Back to top button
Close
wpDiscuz
0
0
Would love your thoughts, please comment.x
()
x
| Reply
Close