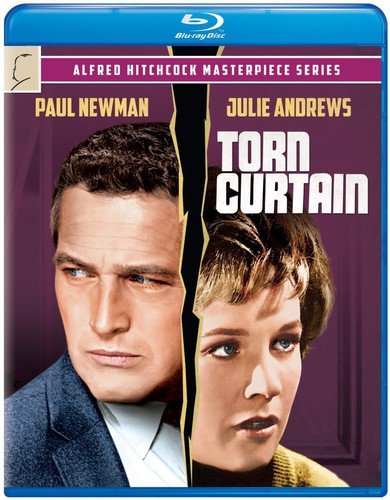 Universal Studios Home Entertainment is has announced the addition of Alfred Hitchcock‘s thriller Torn Curtain to their upcoming slate of Blu-ray releases. The film was written by Brian Moore and starred Paul Newman, Julie Andrews, Lila Kedrova, Hansjörg Felmy, Tamara Toumanova, and Wolfgang Kieling. The Blu-ray of Torn Curtain is currently available for pre-order online and will be available in stores everywhere beginning on October 1st.

In the film, a U.S. rocket scientist Michael Armstrong (Newman) and his assistant/fiancée Sarah Sherman (Andrews) are attending a convention in Copenhagen. When Michael begins acting suspiciously, Sarah follows him to East Germany where it appears he is making an attempt to defect to the other side.

Torn Curtain was released in July of 1966 and grossed over $6 million at the box office.

Disclaimer: Affiliate links are contained in this post. This means when you click a link, and purchase an item, Movie House Memories will receive an affiliate commission. Advertisers and Affiliate Partnerships do not influence our content. See our Terms of Use about the inclusion of affiliate links on this site for more information.
September 24, 2013
268 1 minute read
Show More
Subscribe
Login
0 Comments
Inline Feedbacks
View all comments
Most Recent Posts
Facebook Twitter LinkedIn Tumblr Pinterest Reddit
Back to top button
Close
wpDiscuz
0
0
Would love your thoughts, please comment.x
()
x
| Reply
Close