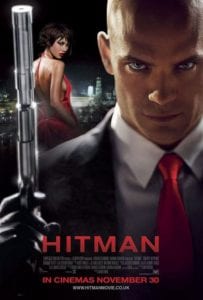 I will preface this with the fact and apology I have never played the video game. Honestly, I’d never even heard of it before watching this movie. I must also state I like Timothy Olyphant in pretty much anything he tries. 🙂 I found this DVD at the discount movie store for $1 and thought, “Why not?” I’m soooo happy I purchased it.

This movie is exactly as it states: It’s about an Unrated Hit-man that acts more machine-like than human who tracks down and eliminates any and all targets without the least amount of emotion. Just cold, bloody murder-for-hire. You will figure out where he came from within the first few minutes of the film so there is very little mystery when the movie starts. What followed, however, was pure, violent entertainment.

It was stylish, sexy, brutal, graphic and genuinely enjoyable as a movie experience. I truly believed Agent 47 could live/kill/slaughter without emotion. It was stylistically up in the “Kingsman”/”Lucy” range of movie violence. That is high praise as far as I’m concerned.

I’m not giving anything away by saying there is a lot of killing. And the director obviously perfected original, graphic ways of portraying said death. It takes a special someone to create new ways of celluloid bloodiness without going overboard into the Tarantino-enthused “blood explosions” that are both non-realistic and off-putting. “Hitman” had the necessary blood-letting, but refrained from becoming the crazed, unrealistic, explosion of human tissue bloodfests so associated with the Tarantino-like crowd.

Timothy Olyphant was perfectly cast. I understood they thought of other actors for the character, but Olyphant really was Agent 47. His expressive eyes and the ability to convey venom and danger by simply standing still was marvelous.

Dougray Scott played the tortured, ethical Interpol operative trying to track a ghost with excellent restraint and tenacity — think Stephen Rea in “V for Vendetta” and always being one step behind a genius of mayhem. You gotta feel for a law enforcer who has to track someone as beautifully violent and elusive as Agent 47.

Olga Kurylenko is gorgeous and very sexy as the prostitute/witness. This is NOT a PG-13 movie, hence the “Hitman UNRATED” title. Spoiler alert maybe – this movie has nudity. You can read that in the “Content Advisory” section of this site. Sorry to the folks who are against that part. But if you can handle an unrated movie about an emotionless hit-man killing people with gusto, seeing a beautiful actress in various stages of undress shouldn’t be all that shocking.

For a movie I hadn’t heard anything about and bought for $1, this was one of those excellent surprises I always hope for. After watching literally thousands of movies, it is refreshing to see something with some originality, style, charm and intelligence. I would recommend this to anyone wanting a good action movie with a wonderful protagonist acting exactly as a hit-man should – he gets his prey and doesn’t apologize about it. Watch this one. I think it is worth your time.

A gun-for-hire known only as Agent 47 hired by a group known only as 'The Organization' is ensnared in a political conspiracy, which finds him pursued by both Interpol and the Russian military as he treks across Russia and Eastern Europe.