As the McCallister family is prepares for a vacation in Paris, France during the Christmas Season, their youngest, Kevin gets into a spat with his older brother Buzz. As punishment, his parents send him to his room on the third floor. When Kevin wakes the next morning, he finds the rest of the family gone. They rushed off to the airport to make it on time; completely forgetting him. Now with the house all to himself, Kevin has a bit of fun eating all the pizza he wants, jumping on his parents’ bed, and making a general mess. However, when Kevin discovers two thieves trying to rob his house on Christmas Eve, he booby traps his home to stop the men. Hilarity and swift justice ensues. 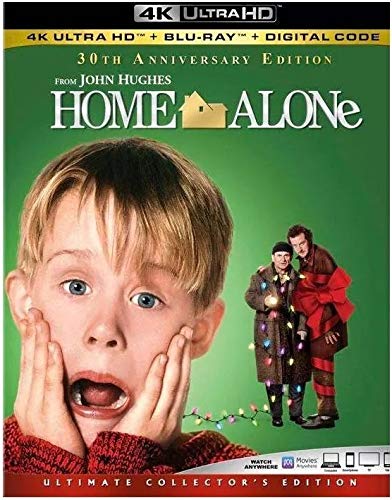 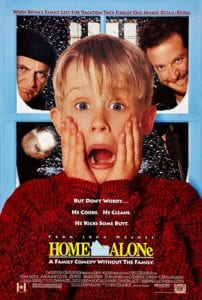 It’s Christmas in the McCallister house. A family of smug and condescending suburbanites prepares for their trip to France, where they will learn how to sharpen their smug condescension from the experts. Kevin McCallister (played by Macaulay Culkin), a boisterous towheaded 8 year old causes trouble with his family, culminating in the spilling of a soda and the forced vomiting of an entire large cheese pizza.

Kevin is chastised and sent to bed without his dinner or his passport. In his boyish rage, Kevin wishes that his family would disappear as a Christmas gift, which is the same gift for which Charles Manson wished that year they were sold out of Partridge Family lunch pails.

Someone else, however, is eyeing Kevin’s house. Two robbers, played by Joe Pesci and some dude with a beard, have been casing the house, hoping to steal its valuables and clog its sink. Despite being among the greatest cat burglars in the world, these robbers are only slightly less incompetent and cowardly than the Chicago Police. They come to burgle the house on several occasions but are scared away by Kevin’s antics.

Meanwhile, Kevin’s mom is determined to get home and care for her annoying child. She takes any flight she can get, crisscrossing the United States and inching closer to Chicago. She evens goes so far as hop in a van with a polka band where John Candy proudly shows off his clarinet.

The burglars muster all of their courage and plan one big last heist at the McCallister house. Kevin is ready for them, and the results are hilarious. He manages to trap them down a flight of stairs, burn one’s hand with a scalding door knob, smash one’s face with a hot iron, impale a foot on a tarry nail, scald Joe Pesci’s scalp with a blow torch, shoot him in the nuts with a BB gun, dress him like a chicken, call the two of them a “horse’s ass,” make them slip on micro machines, smash their faces with paint cans, and even use the oldest trick in the book, the old tarantula on the face. The burglars persist through all of this.

Ultimately, the burglars outsmart Kevin and catch him. He’s saved as Pesci prepares to bit off Kevin’s fingers—seriously—when the creepy old murderer in the neighborhood bashes both burglars’ faces with a snow shovel. From there, the police handle it, and both burglars are back on the street within eight hours.