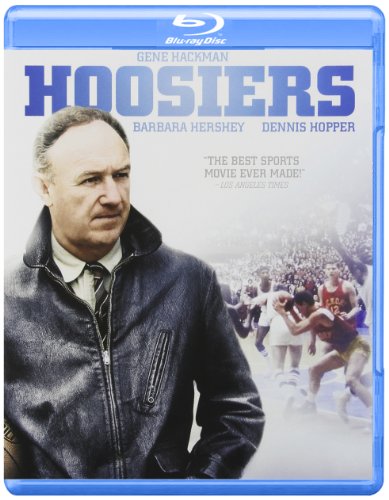 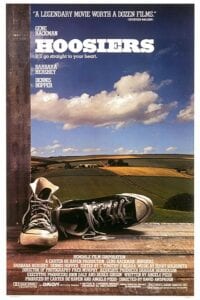 In the fall of 1951, Norman Dale retired from the United States Navy after twelve year. Norm decided to take a scenic drive to the one stoplight town of Hickory, Indiana after being hired by his college buddy, Cletus, to be the U.S. History and Civics teacher at Hickory High School. I almost forgot. Norm was also hired to be the head basketball coach of the Hickory Huskers, in the basketball crazy state.

Unfortunately, Coach Dale doesn’t receive the warmest of welcomes from the locals. Shortly after his arrival, Norm is interrogated by the assistant principal, sheriff, town barber, and team’s pastor about his experience as a college coach, qualifications as a teacher, and, most importantly, preferred defensive strategy. With just two weeks before their first game of the season, Norm’s initial introduction to the team is quite the calamity as well.

Norm politely fires the acting coach but is immediately threatened with unnecessary violence. Trust me: NOBODY wants to have their ass strapped to a pine rail and sent him up the Monon Line. (That’s a railroad car and railway, respectively, for those non-Hoosiers out there.) From there, Coach Dale introduces himself to the seven players on his team but must immediately dismiss two of them for being disrespectful. The five remaining players begin practicing the sport of basketball in a manner that would be equated with basic training in the Army, focusing solely on physical conditioning and learning how to function as a disciplined team.

Meanwhile, in the shadows of Hickory’s gymnasium, Jimmy Chitwood, one of the best high school basketball players in Indiana, watches his former teammates work their drills. Jimmy quit playing basketball in the offseason, after the previous coach passed away and his mother took sick. However, Jimmy’s love for the game never waned and he is regularly found shooting hoops in or around Hickory High.

Coach Dale is unceremoniously welcomed to Indiana basketball during Hickory’s first game when the townsfolk boo and chastise him for enforcing his disciplined style of play, even when the boys struggle. After one player goes against the coach’s wishes, Norm punishes the lad with a permanent seat on the player’s bench and elects to play with only four players. The Huskers eventually lose the first of many games and Norm is forced to give the team a “my way or the highway” ultimatum. After a fight breaks out during one physical game, Cletus suffers a heart attack.

Cletus is replaced as assistant coach by former Husker basketball legend, and the notable town drunk, Wilbur “Shooter” Flatch. Once again, Coach Dale raises the ire of the townsfolk by hiring “Shooter” and faces an open referendum to have him removed as the varsity basketball coach. Jimmy shows up at the town hall meeting and announces that it’s time for him to start playing ball. However, Jimmy will only play if Coach Dale stays on as the head coach. The townsfolk, who were set and ready to run Norm out of town, have an immediate change of heart and vote to keep Coach Dale employed in Hickory. With Jimmy back on the team, the Huskers begin playing basketball with extraordinary passion and go on a long winning streak.

Their winning ways generate positive momentum for a run in the historic Indiana State High School Basketball Tournament. The Huskers struggle mightily during each round of the tournament, but ultimately find themselves playing against South Bend Central in the State Championship game. This “David vs. Goliath” matchup is followed by the entire state. It features South Bend Central, with an enrollment of 2,800, battling Hickory, which has an enrollment of 64.

After being outclassed early on in the Championship game, the Huskers turn to their star player, Jimmy Chitwood, to help spark a comeback. Jimmy’s sharp shooting, along with the team’s disciplined style of play, eventually frustrates the big city school and Hickory positions themselves to win the State Title with the last possession of the game. During the final strategy huddle, the Huskers players show a lack of confidence in Coach Dale’s play calling, but Jimmy Chitwood, with all of the confidence in the world, tells his coach and his teammates that he WILL MAKE the final shot of the game.

Chitwood, like all sports legends before and since, creates his own legend by converting an 18 foot jump shot as time expires to win the Indiana State Basketball Championship for the Hickory Huskers, sending the Butler Fieldhouse into a state of pandemonium. Coach Norman Dale and his Hickory Huskers win the 1952 championship, completing one of the most fabled stories in sports history.