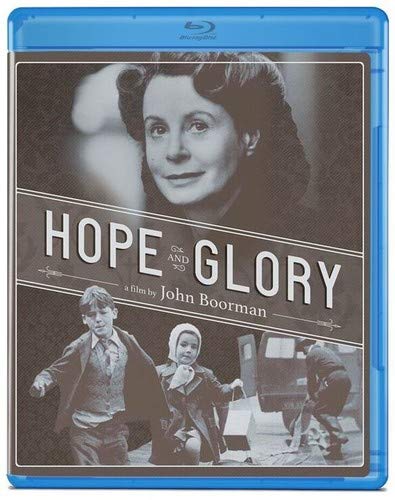 Hope and Glory, John Boorman’s (Deliverance) autobiographical film is a nostalgic and gently comic remembrance of England during the turbulent Blitz as seen through the eyes of 10-year-old Billy Rohan (Sebastian Rice-Edwards). While the beauty of the aircrafts and tanks holds endless wonders for the young boy, others know all too well the destruction they bring.

Navigating difficult times are mother Grace (Sarah Miles, Academy Award® nominee for Best Actress – Ryan’s Daughter, 1971), who finds herself head of the household when her husband is drafted; Billy’s sister, Dawn (Sammi Davis, Mona Lisa), whose romance and pregnancy with the dashing Canadian airman Corporal Carrey (Jean-Marc Barr, The Big Blue) is yet another challenge for the stoic Grace; and George (Ian Bannen, Gandhi), Billy’s curmudgeonly grandfather whose idyllic country home will open Billy’s eyes to a whole new world.

Disclaimer: Affiliate links are contained in this post. This means when you click a link, and purchase an item, the MHM Podcast Network will receive an affiliate commission. Advertisers and Affiliate Partnerships do not influence our content. See our Terms of Use about the inclusion of affiliate links on this site for more information.
March 28, 2018
1 minute read
Show More
Back to top button
Close
Close