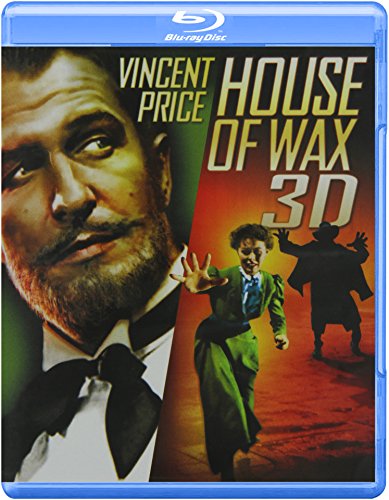 Warner Bros. Home Entertainment has announced the addition of a 3D Blu-ray release of 1953’s House of Wax to their upcoming slate of Blu-ray releases. The film was directed by André De Toth and starred Vincent Price, Frank Lovejoy, Phyllis Kirk, Carolyn Jones, Paul Picerni, and a young Charles Bronson. The 60th Anniversary Edition Blu-ray features 3D and 2D presentations minted from a 4K scan and restoration, a new featurette and the original 1933 film, Mystery of the Wax Museum. House of Wax is currently available for pre-order online and will be available in stores everywhere beginning on October 1st.

In the film, Professor Henry Jarrod (Price) is the owner and figure sculptor in a wax museum whose specialty is historic figures. When he and his business partner, Matthew Burke (Roy Roberts) quarrel over the choice of exhibits displayed, Burke suggests it would be more profitable to burn down the museum in order to obtain the insurance money. As they fight, the museum burns and Jarrod is left for dead. It’s not until much later at a new museum that the fate of Jarrod and the mystery of how the lifelike waxed figures are created becomes gruesomely evident.

In 1953, House of Wax was the first color 3D feature released by a major studio, and quickly became a box office hit. If adjusted to today’s gross, it would have brought in more than $401 million, placing it among the top 100 highest grossing films of all time. It no doubt paved the way for a 3D boom over the next several years as well, during which fifty 3D features and some two dozen shorts and cartoons were released.

The House of Wax Blu-ray will include several special features, including:

Disclaimer: Affiliate links are contained in this post. This means when you click a link, and purchase an item, Movie House Memories will receive an affiliate commission. Advertisers and Affiliate Partnerships do not influence our content. See our Terms of Use about the inclusion of affiliate links on this site for more information.
September 25, 2013
1 minute read
Show More
Back to top button
Close
Close