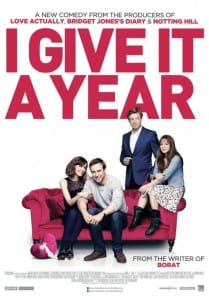 Magnolia Pictures has released a red band trailer for their upcoming romantic comedy I Give It A Year. The film is written and directed by Dan Mazer and stars Rose Byrne, Rafe Spall, Alex Macqueen, Stephen Merchant, Jane Asher, Minnie Driver, and Jason Flemyng. I Give It A Year is scheduled to be released in theaters in the United States on August 9th.

The film is a look at the trials and tribulations of a newlywed couple during their first year of marriage. I Give It A Year was released in February in the United Kingdom. The film was shot in the U.K. and is produced by Tim Bevan, Eric Fellner, and Kris Thykier.

Two Trailers For The Last Days On Mars

Two Trailers For The Last Days On Mars