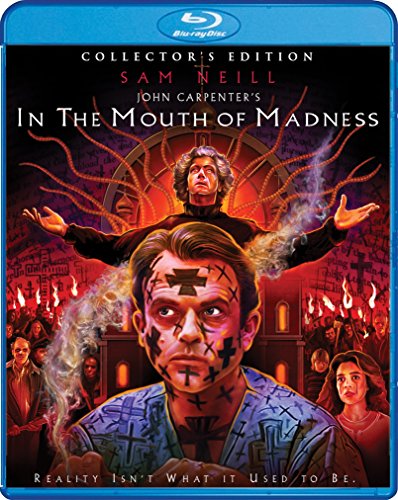 In the Mouth of Madness [Blu-ray]

Warner Bros. Home Entertainment has announced the addition of In the Mouth of Madness to their upcoming slate of Blu-ray releases. The film was directed by horror legend John Carpenter and starred Sam Neill, Julie Carmen, Jürgen Prochnow, David Warner, John Glover, Bernie Casey, Charlton Heston, and a young Hayden Christensen. In the Mouth of Madness will be available for purchase online and in stores beginning on October 15h.

Best-selling author and Stephen King contemporary Sutter Cane’s newest novel is literally driving his readers insane. When the author inexplicably vanishes, an insurance investigator named John Trent (Neill) is hired by Arcane Publishing director Jackson Harglow (Heston) to track the author down. But Trent, along with Cane’s editor Linda Styles (Carmen), soon finds himself crossing the barrier between fact and fiction, and entering a terrifying world of evil and madness from which there is no escape.

In the Mouth of Madness was released in February of 1995 and grossed over $8 million at the box office.

Disclaimer: Affiliate links are contained in this post. This means when you click a link, and purchase an item, Movie House Memories will receive an affiliate commission. Advertisers and Affiliate Partnerships do not influence our content. See our Terms of Use about the inclusion of affiliate links on this site for more information.
June 10, 2013
1 minute read
Show More
Back to top button
Close
Close