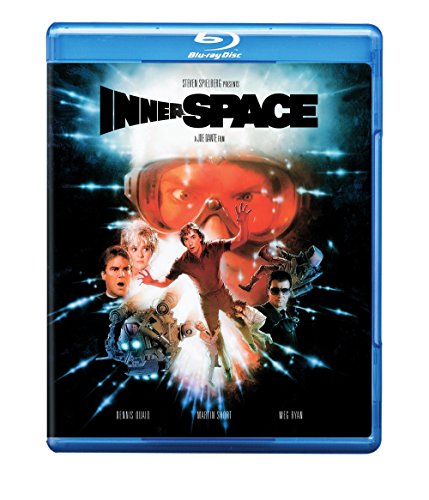 Warner Bros. Home Entertainment has announced that they are releasing Innerspace (1987) onto Blu-ray. The film is directed by Joe Dante and stars Dennis Quaid, Martin Short, Meg Ryan, Kevin McCarthy, and Robert Picardo. Innerspace will be available online and in stores beginning August 4, 2015.

In the film, the voice Jack (Short) hears is that of hotshot Navy pilot Tuck Pendleton (Quaid), subject of a secret miniaturization project gone awry and accidentally injected into Jack. And before frazzled Jack can say, “I’ve got you under my skin”, his unlikely partner propels him into the craziest escapade of his life.

The original movie was released in the United States on July 3, 1987 and grossed over $25 million at the box office. The film won an Academy Award for Best Visual Effects.

Warner Bros. Home Entertainment has not released any information concerning technical specifications, but the special features will include:

Disclaimer: Affiliate links are contained in this post. This means when you click a link, and purchase an item, Movie House Memories will receive an affiliate commission. Advertisers and Affiliate Partnerships do not influence our content. See our Terms of Use about the inclusion of affiliate links on this site for more information.
April 19, 2015
1 minute read
Show More
Back to top button
Close
Close