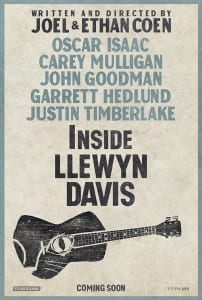 CBS Films and StudioCanal, via Yahoo! Movies, have released a Red Band teaser trailer and the Cannes teaser poster for Inside Llewyn Davis. The film is written and directed by Ethan Coen and Joel Coen. Inside Llewyn Davis stars Oscar Isaac, Carey Mulligan, John Goodman, Garrett Hedlund, F. Murray Abraham, and Justin Timberlake. The drama is scheduled to be released on December 6, 2013.

Inside Llewyn Davis follows a week in the life of a young folk singer as he navigates the Greenwich Village folk scene of 1961. Guitar in tow, huddled against the unforgiving New York winter, he is struggling to make it as a musician against seemingly insurmountable obstacles—some of them of his own making.