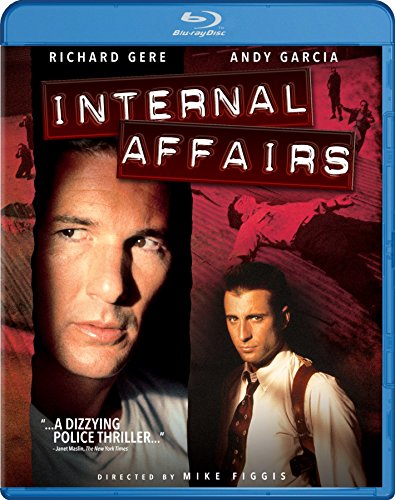 Warner Bros. Home Entertainment has announced the addition of the crime drama Internal Affairs to their upcoming slate of Blu-ray releases. The film is being released as part of their distribution deal with Paramount Pictures. The comedy was written and directed by Mike Figgis and stars Richard Gere, Andy Garcia, Laurie Metcalf, Nancy Travis, William Baldwin, and Xander Berkeley. Internal Affairs will be available for purchase online and in stores beginning on October 8th.

In the film, Dennis Peck (Gere), a Los Angeles cop, knows his way around the law. He can launder money, run a scam, and fix a bad rap. For the right price, he can even arrange a murder. But Raymond Avila (Garcia), an Internal Affairs investigator assigned to investigate Peck, is determined to bring him to justice. However, Peck isn’t going down without a fight. The slick, cold-blooded manipulator intends to take Avila’s career, his marriage, even his sanity with him.

Internal Affairs was released in January of 1990 and grossed over $27 million in worldwide box office.

Quigley Down Under (1990) Shoots Up Some Blu-Ray

Quigley Down Under (1990) Shoots Up Some Blu-Ray