Ed Okin is an unhappily married man who is in a dead-end job as an aerospace engineer. Unsurprisingly, he’s depressed and unable to sleep at night. However, getting away from his life proves to be harder than it should be when he drives to the airport and a gorgeous smuggler named Diana jumps into his car. With four assassins in hot pursuit, the two race across Los Angeles where they encounter an endless array of intriguing nocturnal characters and a charming English hitman. 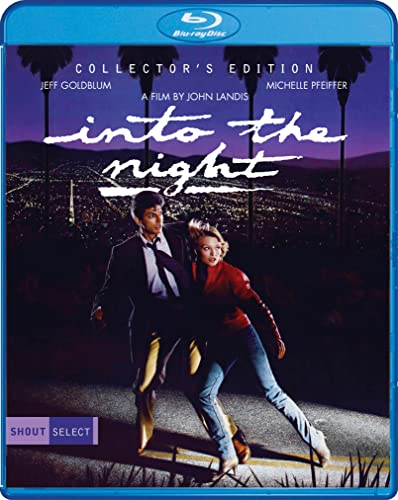 Into The Night [Collector's Edition] [Blu-ray]

‘Into The Night’ Movie Summary 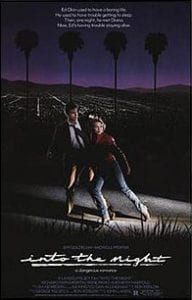 Jeff Goldblum plays a depressed insomniac by the name of Ed Okin, the 80’s equivalent to Rami Malek. A kind of weird, socially awkward man with big eyes. Although the 80’s version of Elliot Alderson also works with computers, Ed at least marries.

Ed discovers his wife’s affair which compounds his sleep issues. Instead of confronting the cheating bitch about it, Ed jumps into the hatchback. He then heads off to the airport with visions of Sin City in his future. Once at the airport, Ed encounters the unusually beautiful Diana, played by Michelle Pfeiffer.

Four Iranian assassins attack Diana and her would be male suitor in the airport’s garage. The assassins, who are a cross between the Three Stooges and Corporal Hudson from Aliens, are able to kill Diana’s male companion, but Diana is able to escape. She runs into Ed in his car, who quickly gets the beautiful girl out of the garage and into his heart. While they could go to the police, Diana leads Ed on tour of Los Angeles filled with Hollywood directors.

Eventually, Diana reveals the reason she can’t go to the police. You see, Diana smuggled stolen emeralds from the treasury of the Shah of Iran into the United States. She hid them in Aphrodite’s personal handbag, the vajayjay, because today’s modern woman knows her love box is one presidential handshake away from #metoo mania.

The Chase is On

Now, multiple assassins and thieves try to get the stolen jewels from Diana and Ed all over Los Angeles. They leave a trail of bodies behind them as everyone who has the misfortune of encountering Ed and Diana soon comes into contact with the Iranian stooges or a murderous Ziggy Stardust.

Eventually, Ed and Diana turn to Diana’s sugar daddy, Jack, for assistance. Diana lost contact with Jack when he turned ill, and Jack’s psycho wife cock blocked him. Jack helps them out by giving them some information, some money, and a couple of cars. The information is that the big bad of the film, Shaheen Parvici, a wealthy Iranian woman who is desperately trying to put together the funds for a real estate deal. Shaheen needs the jewels to raise the capital for the deal. Jack convinces Ed and Diana that they need to make a deal with Shaheen if they want to stay alive.

Ed volunteers to go and set up the deal with Shaheen while Diana runs and hides the jewels. After Shaheen pays Ed the money for the jewels, they release him, and he heads to the airport to meet Diana. Diana calls Shaheen and tells her where the jewels are. When Shaheen arrives to pick up the jewels, the authorities arrest her.

Ed and Diana attempt to fly to Mexico, but before they can make their southern getaway, one of the Iranians takes Diana hostage. Police, federal agents, and TSA agents jump out of every corner and point their guns at the Iranian assassin and Diana. Ed tries to talk the Iranian down by talking about his own life. But this has the same effect as anyone sitting next to Robert Hays in Airplane. The Iranian stooge shoots himself in the head.

Ed and Diana go to a nearby hotel. There Jack gives them a suitcase full of money. They must stay in the room for next 24 hours before leaving. Ed lays down on the bed, and finally falls asleep for the first time in days. He wakes two days later; alone and without the money. When he goes to leave, he finds Diana waiting for him in the hallway. Their adventure is just beginning.