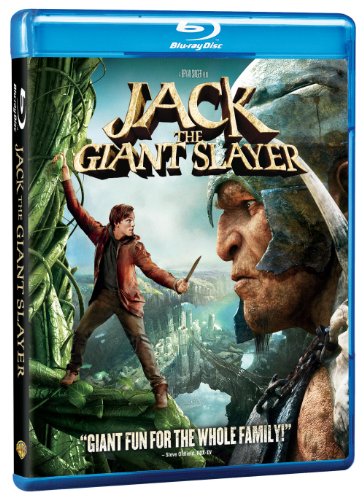 Warner Bros. Home Entertainment has announced that they will bring the family adventure Jack the Giant Slayer to 3-disc 3D Blu-ray/Blu-ray/DVD/UltraViolet combo pack and a 2-disc Blu-ray/DVD/UltraViolet combo pack this June. The film is directed by Bryan Singer and stars Nicholas Hoult, Stanley Tucci, Ian McShane, Bill Nighy, Eleanor Tomlinson, and Ewan McGregor. Jack the Giant Slayer will be available online and in stores beginning on June 18th.

Jack the Giant Slayer tells the story of an ancient war that is reignited when a young farmhand unwittingly opens a gateway between our world and a fearsome race of giants. Unleashed on the Earth for the first time in centuries, the giants strive to reclaim the land they once lost, forcing the young man, Jack (Hoult), into the battle of his life to stop them. Fighting for a kingdom, its people, and the love of a brave princess (Tomlinson), he comes face to face with the unstoppable warriors he thought only existed in legend—and gets the chance to become a legend himself.

Jack the Giant Slayer was released in March of 2013 and grossed over $192 million in worldwide box office to date.

Both combo packs will include several special features, including: Become A Giant Slayer – an eight part making-of featurette; deleted scenes; gag reel; a DVD copy of the film; and an UltraViolet copy of the film.

Disclaimer: Affiliate links are contained in this post. This means when you click a link, and purchase an item, Movie House Memories will receive an affiliate commission. Advertisers and Affiliate Partnerships do not influence our content. See our Terms of Use about the inclusion of affiliate links on this site for more information.
April 28, 2013
1 minute read
Show More
Back to top button
Close
Close