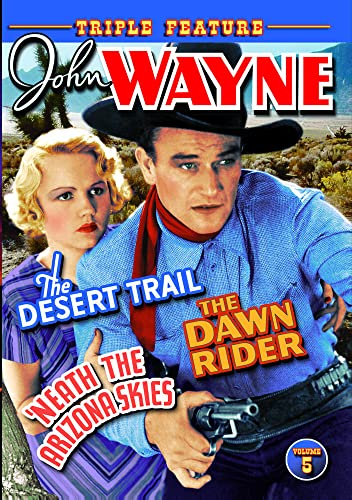 Alpha Video released the John Wayne Triple Feature: Volume 5 with The Desert Trail, The Dawn Rider, and ‘Neath the Arizona Skies to DVD on September 26, 2006.

After someone kills John Mason’s father, and another wounds him, John finds himself attracted to his nurse Alice while in recovery. However, a conflict quickly arises between him and his friend Ben who plans to marry Alice. John later finds the killer of his father, but goes to face him not knowing Ben has removed the bullets from his gun.

Chris Morrell is the guardian of half-Indian girl named Nina. He’s out helping her find her missing white father so she can cash in on her late mother’s oil lease. However, outlaw Sam Black is after the girl and her father too. To make matters worse, Morrell must find another robber named Jim Moore. Along the way, Chris runs into Jim Moore’s sister, another outlaw who’s in cahoots with Sam Black, and an old friend who takes in Nina.

Disclaimer: This post contains affiliate links. This means when you click a link, and purchase an item, Movie House Memories will receive an affiliate commission. Advertisers and Affiliate Partnerships do not influence our content. See our Terms of Use about the inclusion of affiliate links on this site for more information.
October 3, 2020
244 1 minute read
Show More
Subscribe
Login
0 Comments
Inline Feedbacks
View all comments
Most Recent Posts
Facebook Twitter LinkedIn Tumblr Pinterest Reddit
Back to top button
Close
wpDiscuz
0
0
Would love your thoughts, please comment.x
()
x
| Reply
Close