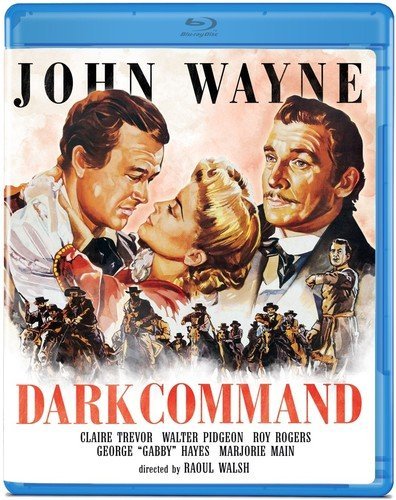 Olive Films has announced that they are adding the western Dark Command to their upcoming slate of Blu-ray releases. The film was directed by Raoul Walsh and stars Claire Trevor, John Wayne, Walter Pidgeon, Roy Rogers, and George ‘Gabby’ Hayes. Dark Command will be available in stores and online beginning on May 28th.

In the film, Wayne is good guy Bob Seton in this star-studded thriller set in the dark days before the Civil War. During this strained period in America’s history, emotions run high and tension fills the air, especially during political contests. In the race for Federal Marshall of Kansas, Seton defeats William Cantrell, causing increased animosity between these two powerful figures. Their mutual ill will peaks when Cantrell steals Seton’s girl, manipulating her into marriage to get even with Seton. Their rivalry reaches dangerous proportions when Seton exposes Cantrell and his guerrillas who have been raiding both Union and Confederate lines.

Dark Command was released in April of 1940 and nominated for two Academy Awards, Best Music and Best Art Direction.

Choose Scrooge (1935) in Color or Black and White on DVD

Choose Scrooge (1935) in Color or Black and White on DVD