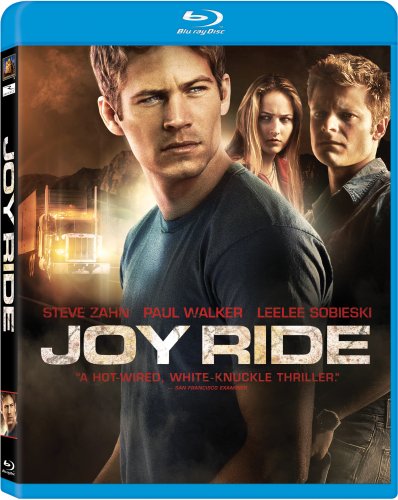 20th Century Fox Home Entertainment has announced the addition of the thriller Joy Ride (a.k.a Roadkill) to their upcoming slate of Blu-ray releases. The film was directed by John Dahl and written by Clay Tarver and J.J. Abrams. The thriller Steve Zahn, Paul Walker, Leelee Sobieski, and Jessica Bowman. Joy Ride is currently available for pre-order online and will be available for purchases in stores everywhere beginning on September 10th.

In the film, Lewis (Walker) and Fuller (Zahn) are two brothers traveling across America by car. In order to pass the time, they use the CB radio to play a joke on a trucker named Rusty Nail, convincing him that Lewis is a woman called Candy Cane and arranging a rendezvous in a motel room. But when the trucker realizes what has happened, he kills the innocent occupant of the motel room, kidnaps the room-mate of Lewis’ friend Venna (Sobieski), and comes after the teenagers in a psychotic fit of rage.

Joy Ride was released in October of 2001 and grossed over $36 million in worldwide box office.

Disclaimer: Affiliate links are contained in this post. This means when you click a link, and purchase an item, Movie House Memories will receive an affiliate commission. Advertisers and Affiliate Partnerships do not influence our content. See our Terms of Use about the inclusion of affiliate links on this site for more information.
August 4, 2013
350 1 minute read
Show More
Subscribe
Login
0 Comments
Inline Feedbacks
View all comments
Most Recent Posts
Facebook Twitter LinkedIn Tumblr Pinterest Reddit
Back to top button
Close
wpDiscuz
0
0
Would love your thoughts, please comment.x
()
x
| Reply
Close