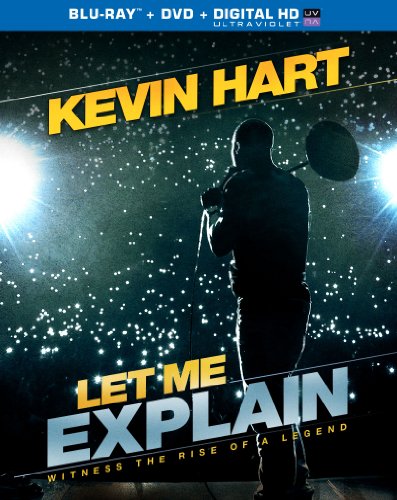 Summit Entertainment has announced the addition of the documentary stand-up comedy film Kevin Hart: Let Me Explain to their upcoming slate of Blu-ray releases. The film is currently available on pre-order online and will be available in stores everywhere beginning on October 15th.

The documentary film is directed by Leslie Small and Tim Story. Filmed at a sold-out performance at Madison Square Garden, Let Me Explain captures the laughter, energy and mayhem from Kevin Hart‘s 2012 concert tour, which spanned 10 countries and 80 cities, and generated over $32 million in ticket sales. Hart’s “Let Me Explain” tour was one of the most successful comedy tours of all time, with more than 540,000 tickets sold. Both of his shows at New York’s Madison Square Garden and his performance at London’s O2 Arena sold out, as well as his appearances in Canada, Norway, Sweden, Denmark and Amsterdam. The tour concluded this past New Year’s Eve in Los Angeles by selling out the Staples Center and grossing over $1 million in revenue in one night. Only five other comedians – Andrew Dice Clay, Dane Cook, Chris Rock, Russell Peters and Eddie Murphy – have sold out Madison Square Garden where Kevin Hart: Let Me Explain was filmed.

Comedian Hart had been a extremely successful stand-up comedian for many years, appearing in many films in supporting roles. He gained prominence last year with his break through performance in Think Like A Man. He will next be seen in the comedy This Is The End and the dramedy About Last Night.

The Kevin Hart: Let Me Explain Blu-ray will include several special features, including:

Disclaimer: Affiliate links are contained in this post. This means when you click a link, and purchase an item, Movie House Memories will receive an affiliate commission. Advertisers and Affiliate Partnerships do not influence our content. See our Terms of Use about the inclusion of affiliate links on this site for more information.
September 30, 2013
414 1 minute read
Show More
Subscribe
Login
0 Comments
Inline Feedbacks
View all comments
Most Recent Posts
Facebook Twitter LinkedIn Tumblr Pinterest Reddit
Back to top button
Close
wpDiscuz
0
0
Would love your thoughts, please comment.x
()
x
| Reply
Close