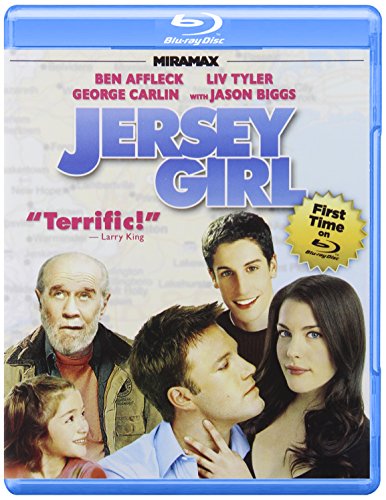 Miramax has announced that they are bringing Kevin Smith‘s Jersey Girl to Blu-ray this May.  The film was written and directed by Smith and starred Ben Affleck, Liv Tyler, George Carlin, Jason Biggs, and Raquel Castro.  Jersey Girl will be available on Blu-ray May 7, 2013.

The film is the story of Ollie Trinke (Affleck), who is expecting a baby with his new wife, Gertrude (Jennifer Lopez).  When the baby arrives, Gertrude has an aneurysm and passes away after the birth of their new baby daughter Gertrude “Gertie” Trinke (Castro).  He is forced to live with his father (Carlin) while raising little Gertie.  After Gertrude’s death, problems occur with Ollie at his job.  After getting fired, Ollie’s life changes after he meets a video store clerk (Tyler) and Gerti’s life is struggling while her father is at a new job.  Along the way, Ollie learns that your family matters more to you in life.

Jersey Girl was released in March of 2004 and grossed over $25 million at the box office.  The film was Smith’s first foray outside the “View Askew Universe” that most of his films take place in.  The film was unfairly critically panned at the time of its release, due primarily to the onslaught of negative publicity that was associated with  Ben Affleck’s relationship with Jennifer Lopez, who had a small role in the film as Trinke’s deceased wife.

Disclaimer: Affiliate links are contained in this post. This means when you click a link, and purchase an item, Movie House Memories will receive an affiliate commission. Advertisers and Affiliate Partnerships do not influence our content. See our Terms of Use about the inclusion of affiliate links on this site for more information.
February 1, 2013
1 minute read
Show More
Back to top button
Close
Close