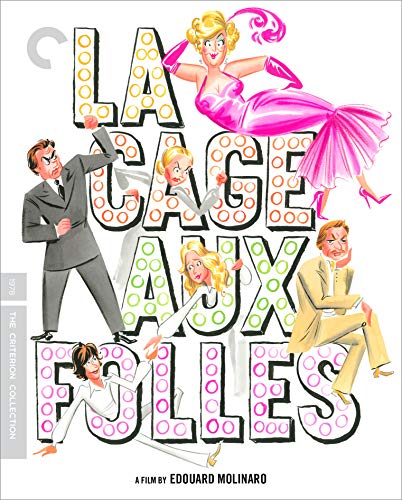 The Criterion Collection has announced the addition of the foreign comedy La Cage aux Folles to their upcoming slate of Blu-ray releases. The film is directed by Edouard Molinaro and stars Ugo Tognazzi, Michel Serrault, Claire Maurier, Rémi Laurent, and Carmen Scarpitta. La Cage aux Folles is currently available for pre-order online and will be available in stores everywhere beginning on September 10th.

In the film, Renato (Tognazzi) and Albin (Serrault)—a middle-aged gay couple who are the manager and star performer at a glitzy drag club in St. Tropez—agree to hide their sexual identities, along with their flamboyant personalities and home decor, when the ultraconservative parents of Renato’s son’s fiancee come for a visit. This elegant comic scenario kicks off a wild and warmhearted farce about the importance of nonconformity and the beauty of being true to oneself. The modest 1978 French comedy that became a breakout art-house smash in America, Edouard Molinaro’s La Cage aux Folles inspired a major Broadway musical and the blockbuster remake The Birdcage, starring Robin Williams, Gene Hackman, and Nathan Lane. But with its hilarious performances and ahead-of-its-time social message, there’s nothing like the audacious, dazzling original movie.

The Red Shoes (1948) Dance onto the Criterion Collection

The Red Shoes (1948) Dance onto the Criterion Collection