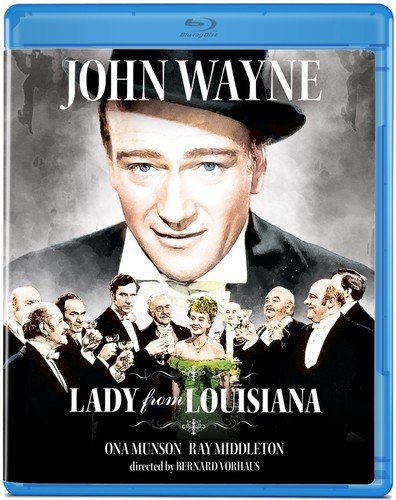 Olive Films has announced that they are adding the drama Lady From Louisiana to their upcoming slate of Blu-ray releases. The film was directed by Bernard Vorhaus and stars John Wayne, Ona Munson, Ray Middleton, Henry Stephenson, and Dorothy Dandridge. Lady From Louisiana will be available in stores and online beginning on May 28th.

In the film, northern lawyer John Reynolds (Wayne) travels to New Orleans to try and clean up the local crime syndicate based around a lottery. Although he meets Julie Mirbeau (Munson) and they are attracted to each other, the fact that her father (Stephenson) heads the lottery means they end up on opposite sides. When her father is killed, Julie becomes more and more involved in the shady activities and in blocking Reynolds’ attempts at prosecution. Lady From Louisiana was released in April of 1941.

Disclaimer: Affiliate links are contained in this post. This means when you click a link, and purchase an item, Movie House Memories will receive an affiliate commission. Advertisers and Affiliate Partnerships do not influence our content. See our Terms of Use about the inclusion of affiliate links on this site for more information.
April 27, 2013
363 1 minute read
Show More
Subscribe
Login
0 Comments
Inline Feedbacks
View all comments
Most Recent Posts
Facebook Twitter LinkedIn Tumblr Pinterest Reddit
Back to top button
Close
wpDiscuz
0
0
Would love your thoughts, please comment.x
()
x
| Reply
Close