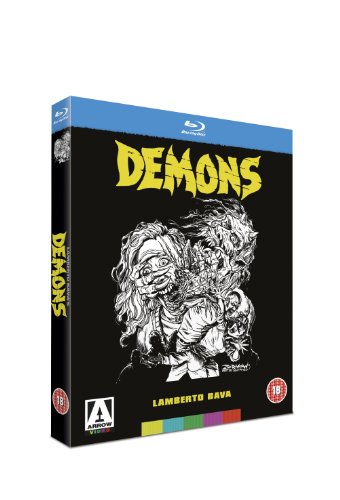 Independent distributors Synapse Films have revealed that they are planning to bring to Blu-ray the cult horror film Demons (1985).  The film was originally released overseas under the title Demoni. Demons is directed by Italian director Lamberto Bava and stars Urbano Barberini, Natasha Hovey, and Karl Zinny.

In Demons, a group of people are trapped in a large movie theater in West Berlin that is infected by ravenous demons who proceed to kill and posses the humans one-by-one, thereby multiplying their numbers.  Legendary filmmaker Dario Argento co-wrote the screenplay and produced the film.

Exact technical specs and supplemental features to be included with this upcoming release are yet to be revealed.  The release is expected to be available on the market later this year.

Here is the theatrical trailer for Demons a.k.a. Demoni.