Katarina “Kate” Andrich is a young woman who constantly makes bad decisions that adversely affect her life, much to the chagrin of her friends and family. She works as an “elf” in a year round Christmas store, but aspires to be a singer. However, when Kate meets the mysterious Tom, an elusive man who refuses to use his cell phone and travels everywhere on his bike, her life begins to change for the better. For Kate, it seems too good to be true and waits for something bad to happen. However, Tom’s influence causes Kate to make better choices. The only question left unanswered, will Kate ever end up with Tom, or does his heart belong to someone else? 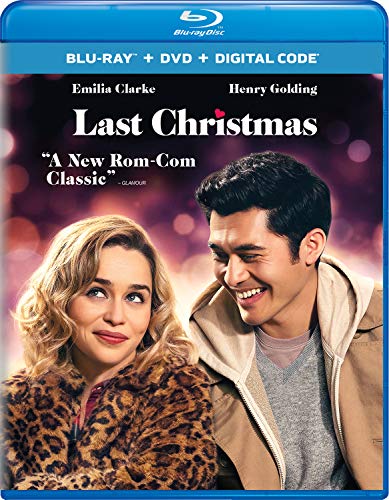 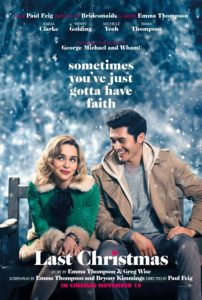 The film begins with a young Katarina “Kate” Andrich (Madison Ingoldsby) singing magnificently in church while her proud parents, Ivan and Petra Andrich (Boris Isaković and Emma Thompson) watch proudly from the audience with their other daughter Marta (Lucy Miller). The film then jumps forward to an adult Kate (Emilia Clarke) living a transient lifestyle and trying to make a career as a singer. Kate works in a dead end job as an elf in a year-round Christmas shop in Central London. The shop’s owner is woman named Huang Qing Shin (Michelle Yeoh) who prefers to be called “Santa”. Santa cares for Kate, but often berates Kate for her laziness on the job and poor lifestyle choices. Kate often gets drunk and sleeps with many men that she picks up at the bars.

One day, Kate finds herself homeless after she is forced out of her latest apartment by her flat mate. Suitcase in hand, she goes into work where she notices a strange man outside staring upwards into the sky. She goes to investigate and discovers the man is looking at a bird on an eve that immediately defecates on Kate’s face. The man introduces himself as Tom Webster (Henry Golding) and shows an immediate interest in Kate, who rebuffs his strange advances despite being desperate for a place to stay.

That night, Santa leaves Kate to close the store and lock up for the night, but Kate forgets to lock the store’s door due to being late for a singing audition. Kate’s audition goes poorly, as she is treated rudely by the show’s director and producer (Rob Delaney and Peter Serafinowicz).

However, she runs into Tom again outside the theater and the couple goes for a walk. Tom charms Kate with his unique perspectives on life as well as his unusual observations of London. Tom takes Kate to a small garden where everyone keeps to themselves. Tom explains that the garden is a special place to him. The couple make tentative plans to talk again and Kate goes to stay with her best friend for night. The next day, Kate upsets her best friend and her husband and once again finds herself homeless again.

Due to Kate’s negligence in locking the store, Santa’s shop is robbed and vandalized. Santa reports it to the police as a break-in to guarantee that she can collect the insurance money needed to repair the store. However, Santa confronts Kate about her failure and confesses that she broke her own window and lied to police to cover for Kate and make sure that the store survives. Santa warns Kate that no matter what her potential is, that if she messes up one more time, Santa will fire her.

Kate is forced to return to her parents’ home in London rather than live on the streets. Petra and Ivan are Yugoslavian immigrants who fled to the United Kingdom due to the war. Petra suffers from depression and Ivan, a former lawyer in Yugoslavia, works as a minicab driver as he cannot afford to practice law in the England. Kate feels suffocated by her mother, who constantly worries about Kate due to a diagnosed heart condition. Kate avoids her mother, who in turn uses Kate’s adult sister Marta (Lydia Leonard) as a go-between to communicate with Kate. Marta is a successful attorney and does not want to be the communication bridge between the two women.

At the same time, Kate begins spending more time with Tom, who makes deliveries on his bicycle and volunteers at a homeless shelter. Kate has no way of reaching Tom since he claims that he keeps his cellphone in a cupboard so that he is not constantly looking down at his hands which allows him to notice things in the world. So when Tom disappears for a few days, Kate goes to the homeless shelter to find him. She begins helping at the shelter in the hope of running into him, but she soon learns that no one has ever met him.

That night, Kate returns to her parents’ home to find her sister Marta present for a dinner to celebrate her promotion at work that Kate forgot. The two sisters begin to trade insults with each other and the dinner begins to become heated. After Marta accuses Kate of hiding who she is, Kate blurts out that Marta is a lesbian, something her parents were unaware of. Marta leaves the house in anger, and Kate feels guilty for what she did.

Kate then goes back to the homeless shelter and runs into Tom on his bike. She berates him for not checking his phone, and realizing that she needs someone to talk to, Tom takes her back to his apartment. At Tom’s flat, Kate reveals that a year earlier, she was very seriously ill and had to have a heart transplant. As a result, Kate confesses to Tom that she feels half dead and wonders whether she actually has the talent to make it as a singer. Tom holds her. However, when Kate tries to have sex with Tom, he politely declines saying that it is too soon. He does kiss her good night.

The next day, Kate begins to take steps to improve her life. She starts taking care of her body and eating healthier. She helps Santa with her new relationship with a strange man (Peter Mygind) who has a fascination with all things Christmas and sauerkraut. She apologizes to her sister Marta and her girlfriend Alba (Jade Anouka), although her sister does not immediately warm to her apologies. Kate also begins singing in front of the homeless shelter for tips, which she donates to the shelter. During this time, she does not see Tom again.

After a few days, Kate goes to the special garden and finds Tom sitting on the bench that he took her to on the first day they met. Kate is glad to see Tom, but when Tom tells her that he has something that he needs to tell her, she immediately becomes defensive and explains to Tom that she knows that he is fearful of commitment and walks away angrily without listening to what Tom needed to tell her.

Kate continues to improve things in her life. She reconnects with her mother. She stops drinking, as much, and stops sleeping with random men. Kate eventually goes to Tom’s flat to apologize to him. However, when she arrives, she is dismayed to discover a real estate agent showing the small apartment. The agent explains to her that the apartment has been vacant during the probate process after the owner was killed in a bicycle accident the previous Christmas. Kate suddenly realizes that Tom was the organ donor whose heart she received the previous year. She flashbacks to all her interactions with Tom and realizes that they were all hallucinations or spiritual apparitions.

Kate goes to the special garden and sits on the bench where Tom took her. Tom mysteriously appears again and explains to her that she was always destined to have his heart, one way or another. Kate kisses Tom one last time before leaving the garden. The camera reveals that the bench which they sat on during their first trip to the garden is a memorial bench for Tom with the words “Look up!”

For Christmas, Kate organizes a talent show using the people and residents of the homeless shelter. She invites her friends and family to attend. Kate performs a solo of the Wham! song “Last Christmas” as she experiences flashbacks of her encounters with Tom. The song culminates with the curtain rising and Kate is joined by a band of performers. Later in the evening, Kate and her family celebrate together, including Marta and Alba who are both accepted by the family.
Kate is next shown several months later, during the summer. Kate is visibly healthier and is busy writing in her journal on Tom’s bench in the special garden. She is smiling and happy. Kate continues to look up just as Tom told her to.