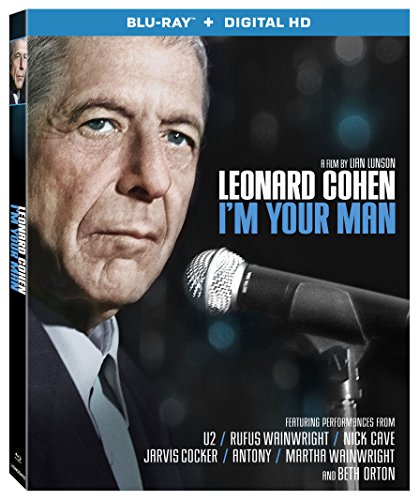 Leonard Cohen: I’m Your Man is a documentary about the legendary singer-songwriter, with performances by those musicians he has influenced.

Leonard Cohen: I’m Your Man was released in July 28, 2006, and grossed over $1.4M at the box office. Sure to please both die-hard Leonard Cohen fans and the newly initiated, this film is full of captivating music and offers an intimate portrait of a truly singular artist — poet, songwriter, cultural icon.

Narrated by Cohen himself, the film features performances of Leonard Cohen songs by such luminary artists as U2, Rufus Wainwright, Nick Cave, Jarvis Cocker, Antony, Martha Wainwright, and Beth Orton, among others.

Affiliate links contained in this post will take you to Amazon.com. This means when you click a link, and purchase an item, the MHM Podcast Network will receive an affiliate commission. When you use these links MHM gets credit regardless of what you purchase, or from what country you order. Best of all, it’s at no extra cost to you! Advertisers and Affiliate Partnerships do not influence our content. See our Terms of Use about the inclusion of affiliate links on this site for more information.
February 7, 2017
1 minute read
Show More
Back to top button
Close
Close