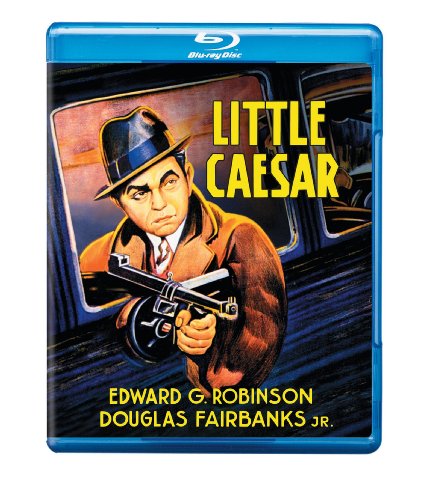 Warner Bros. Home Entertainment has announced that they are bringing Little Caesar to Blu-ray this May. The film was directed by Mervyn LeRoy and stars Edward G. Robinson, Douglas Fairbanks Jr., Glenda Farrell, and William Collier Jr. Little Caesar will be available individually and as part of The Ultimate Gangster Collection Classic set, which will include White Heat, Little Caesar, The Petrified Forest, The Public Enemy, and a fifth disc that includes a feature-length documentary “Public Enemies: The Golden Age of the Gangster Film”. The film will be available online and in stores on May 21st.

“R-I-C-O, Little Caesar, that’s who!” Robinson bellowed into the phone. And Hollywood got the message: 37-year-old Robinson, not gifted with matinee-idol looks, was nonetheless a first-class star, and moviegoers hailed the hard-hitting social consciousness dramas that became the Depression-era mainstay of Warner Bros. Little Caesar is the tale of pugnacious Caesar Enrico Bandello, a hoodlum with a Chicago-sized chip on his shoulder, few attachments, fewer friends and no sense of underworld diplomacy. And Robinson — a genteel art collector who disdained guns (in the movie, his eyelids were taped to keep them from blinking when he fired a pistol) — was forever associated with the screen’s archetypal gangster.

Little Caesar was released in January of 1931 and was nominated for an Academy Award for Best Writing – Adaptation (Francis Edward Faragoh and Robert N. Lee).