Mary Tucker is a poor farm girl who meets Timothy Osborn just as World War I breaks out. Tim enlists in the army, and while on a European battlefield a cart crushes his legs. Once home, Mary visits him, and even though the two fall for each other, Tim’s disability prevents him from telling her his true feelings. Things become complicated when Tim’s old sergeant named Martin Wrenn takes a liking to Mary as well. 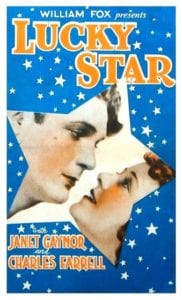 Lucky Star tells the sweet and simple tale of a post-WWI couple. Mary is the scrounging, dirty eldest daughter in a scroungy, dirty backwoods family. Tim is the all-American good guy who defends Mary’s honor in a fight with his lazy, malicious coworker Wrenn. Mary claims Wrenn didn’t pay for the milk she gave him – she’s both filthy and a filthy liar. Suddenly – news… War’s been declared! Tim and Wrenn are off to enlist, but not before Tim finds the quarter Wrenn paid Mary: buried and then uncovered in the dirt by Mary’s shoe. Tim gives Mary a good licking, Mary bites Tim’s thigh, and the two part rubbing their respective injuries.

Mary writes to both Tim and Wrenn, hoping they haven’t been shot too much and promising to knit socks for them. On the front, Wrenn continues to pull his lazy shenanigans. In his desire to go out on the town with French floozies, Wrenn makes Tim deliver food to the men in the trenches, giving Tim the useless cart and taking the car for himself. Tim ventures bravely into the battlefield to make his delivery. When the cart is struck, Tim’s legs are crushed beneath it.

Back in the backwood, Mary sees Tim’s chimney smoking and finds that the man who spanked her has returned. Though it’s been three years since their little tussle, Mary glimpses Tim’s face in the window and immediately throws a rock through it.

Tim’s been lonely for so long that he begs delinquent Mary to come to the door. She does, hesitantly, and sees that Tim is in a wheelchair. Far from being disgusted by his handicap, Mary is thrilled watching Tim spin dreamily in his chair. Tim’s glad Mary doesn’t pity her and after spending the day together the two quickly begin to fall in love.

Unfortunately for them, Wrenn has also come to town! Word on the street is that Wrenn has compromised a local widow’s daughter that he’ll never wed.

Tim gets Mary all cleaned up and by introducing her to soap and eggs. Mary soon after steals her mother’s money to complete the look with a beautiful dress, one that she plans to wear to the local fireman’s dance. Good boy Tim gently admonishes her for stealing from her mother, but the two can’t stay mad for long with all that chemistry between them.

Wrenn spies Mary at the dance and immediately moves on to this widow’s daughter. The two dance and chat, with Wrenn telling fake stories of his heroism. This barely impresses Mary, but it works wonder on her mother! Mary’s abusive mother immediately supports Wrenn’s pursuit while ridiculing the advances of Tim, “the cripple.”

As Mary and Tim fall madly in love, Wrenn convinces Mama to have Mary ready to hop a train with him to the “wedding venue,” where the general himself will be attending the ceremony! Tim has plans to visit Mama and make his case, but a snowstorm gets in his way! Unable to push his wheelchair through the snow, Tim fails to visit and Wrenn arrives to take Mary to their “wedding.”

Then, in an incredible triumph of the spirit, Tim manages to balance on his crutches! He hobbles and collapses through the snowstorm all the way to Mary’s house – only to learn she’s at the train station with Wrenn! Tim continues to station, where Wrenn and Mary stand ready to mount the train. Tim and Wrenn fight and the rest of the townsmen help Wrenn onto the departing train

Mary weeps at the sight of Tim standing proudly before her. The two stand on the tracks, embracing in the falling snow.