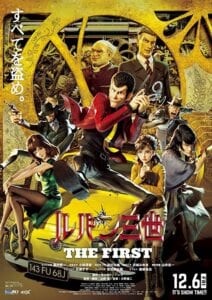 Lupin the Third was first serialized in 1967. Manga artist, Monkey Punch, helped grow the series’ popularity with his drawings of Lupine and the rest of his gang. In 1971, Part one of Lupin III aired on television. With Part 2, Monkey Punch added Lupin’s red jacket which started a trend with many people with his cool, messy, comical appearance; solidifying his popularity.

In Lupin III: The First, Lupin III goes on a grand adventure to uncover the secrets of the Bresson Diary, which is tied to the legacy of his famous grandfather.