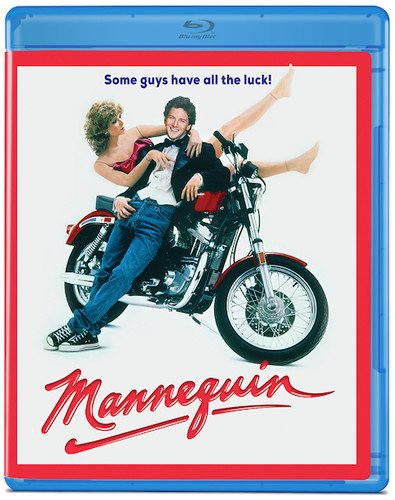 Olive Films has announced that they will release the 1987 romantic comedy Mannequin onto Blu-ray. The film was directed by Michael Gottlieb and starred Andrew McCarthy, Kim Cattrall, Estelle Getty, James Spader, and G.W. Bailey. Mannequin will be available for purchase online and in stores beginning on September 22nd.

Burgeoning artist Jonathan Switcher (McCarthy) is reunited with the love of his life (well, his artistic life anyway) when he discovers the beautifully crafted mannequin he created years earlier is now prominently displayed in the window of the Prince & Company department store. Much to his surprise, and to the delight of the viewer, Jonathan will discover that his art project has more than superficial human traits when it quite literally springs to life in the form of “Emmy” (Catrall).

Mannequin was released February 13, 1987 and went onto gross over $42 million at the box office. The film was nominated for an Academy Award for Best Song (“Nothing’s Gonna Stop Us Now”).

Disclaimer: Affiliate links are contained in this post. This means when you click a link, and purchase an item, the MHM Podcast Network will receive an affiliate commission. Advertisers and Affiliate Partnerships do not influence our content. See our Terms of Use about the inclusion of affiliate links on this site for more information.
July 30, 2015
1 minute read
Show More
Back to top button
Close
Close