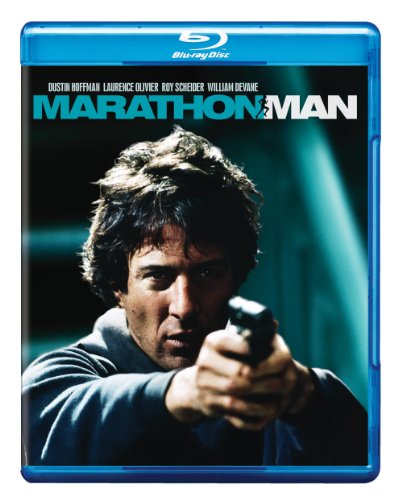 Warner Bros. Home Entertainment has announced the addition of the dramatic thriller Marathon Man to their upcoming slate of Blu-ray releases. The film was directed by John Schlesinger and based upon the screenplay and novel by William Goldman. The thriller starred Dustin Hoffman, Laurence Olivier, Roy Scheider, William Devane, and Marthe Keller. Marathon Man will be available for purchase online and in stores beginning on September 10th.

In the film, Doc Levy (Scheider) is an American secret agent who has been running interference between the U.S. government and escaped Nazi war criminal Szell (Olivier). Believing that Doc has stolen a valuable cache of gems, Szell emerges from his South American hi ding place and heads for New York. He has Doc killed, then kidnaps Doc’s in-the-dark brother Babe (Hoffman). Repeating the phrase “Is it safe?” over and over, Szell, a onetime concentration camp dentist, tries to extract information from Babe. Marathon Man traces Babe Levy’s progression from pacifistic naif to cynical street-smart scrapper.

Marathon Man was released in October of 1976 and grossed over $21 million in worldwide box office. The film was nominated for an Academy Award for Best Supporting Actor (Laurence Olivier).

My Favorite Spy (1951) Is Discovered On Blu-ray

My Favorite Spy (1951) Is Discovered On Blu-ray