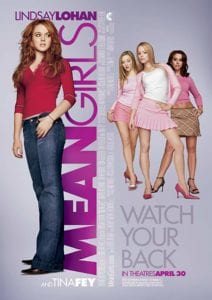 2004’s Mean Girls starring Lindsay Lohan, Rachel McAdams, Daniel Franzese, Tim Meadows, Ana Gasteyer, Amy Poehler, and Tina Fey is one of the decade’s most quoted films. The film is about Cady Heron who gets in tight with The Plastics; an A-list girl clique at her new school…that is until she falls for the dreamy Aaron Samuels who is the ex-boyfriend of alpha Plastic Regina George. She better watch her back!

Read the full movie summary, and add the film to your collection today!

What is your favorite Mean Girl film quote? Tell us in the comments below.