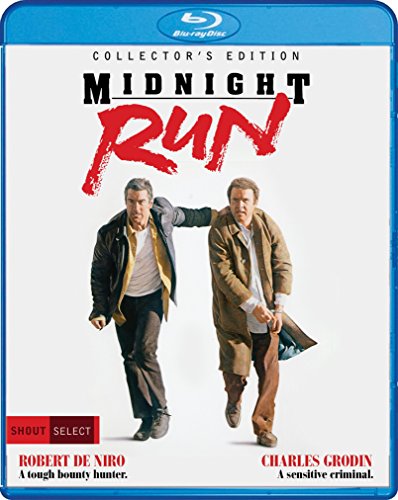 In Midnight Run, Jack Walsh is a bounty hunter for hire. Bondsman, Eddie Moscone hires Walsh to find and return Jonathan “The Duke” Mardukas to Los Angeles, California after he jumps bail. Mardukas is a former Mafia accountant accused of stealing from them, and they want to kill him dead. The FBI also has a vested interest in The Duke. While they have little success in locating him, Jack doesn’t. In fact, he finds him fairly easily; much to the FBI’s embarrassment.

Jack must bring The Duke back to Los Angeles from his hideout in New York in order to collect his $100,000 fee. However, as their plane gets ready for take off, The Duke has a melt down when he reveals that he has a terrible fear of flying. Now, Walsh must drive cross-country to get to LA, but a rival bounty hunter named Marvin Dorfler is out to get the Duke too. As Dorfler, the Mafia, and FBI close in on their man, Mardukas and Walsh develop an odd friendship as this simple midnight run gets more and more complicated.

Disclaimer: This post contains affiliate links. This means when you click a link, and purchase an item, the MHM Podcast Network will receive an affiliate commission. Advertisers and Affiliate Partnerships do not influence our content. See our Terms of Use about the inclusion of affiliate links on this site for more information.

Marvin the Martian Disintegrates a T-shirt

Marvin the Martian Disintegrates a T-shirt